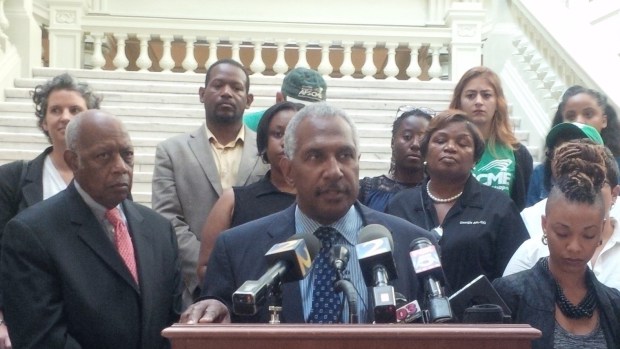 The Atlanta Chapter of the NAACP is calling for the removal of the Confederacy from Stone Mountain Park. Local chapter president Richard Rose says, “It is time for Georgia and other Southern states to end the glorification of slavery and white supremacy, paid for and maintained, with the taxes of all its citizens.” According to Rose, “all of this recognition of Confederate generals is upholding the white supremacy on which the Confederacy was founded and the war was fought.” He goes on to say, “all of this should have ended in 1865 when Lee surrendered to Appomattox.” He’s referring to, what historians refer to as, one of the last battles before Confederate Army General Robert Lee surrendered to Union Army Lt. Ulysses Grant on April 9, 1865.

Recent debate about the emblems was sparked by the mass killings at Emanuel A.M.E. Church in Charleston, South Carolina. Alleged gunman Dylann Roof was seen in photographs posing with the Confederate Flag. While some consider the flag as a commemoration of their heritage, others consider it a symbol of hate. On Friday, South Carolina removed the flag from its statehouse grounds.
Georgia removed the Confederate emblem from its flag in 2001, though the “Stars and Bars” from the First National Confederate Flag remain on the state flag. The Confederate Flag still flies at Stone Mountain Park, which is owned by and run by the State of Georgia. Many, like Congressman Hank Johnson, see the park as a museum for the Confederacy. According to Johnson, “where do we draw the line, do we blast the faces off of Stone Mountain?” Rose says “yes”. He adds, “they can sand blast Lee, Jefferson Davis, and Jackson off tomorrow. I’d be extremely elated.”