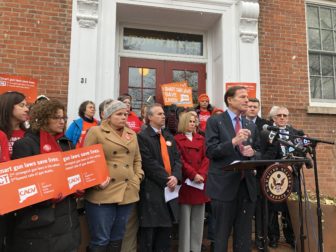 At a press conference on Friday amid snow showers, Blumenthal announced the measure as he stood outside Guilford Town Hall with advocates and the parents of Ethan Song, a 15-year-old local teenager who accidentally fatally shot himself at a friend’s house last January.

On the day before what would have been Song’s 16th birthday, Blumenthal said firearm owners who do not securely store their guns should be held accountable.

“That’s the purpose of this federal law, to hold accountable any firearms owner who fails to safely store or secure their firearms to prevent access from minors or from others who are dangerous, convicted of crimes, and make our communities safer,” Blumenthal said.