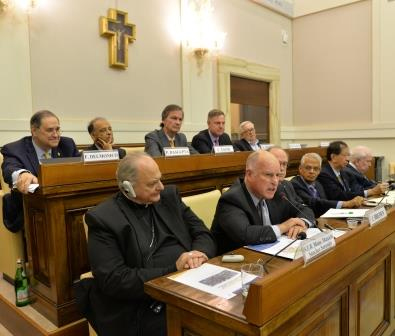 November 5, 2017 – VATICAN CITY – In keynote remarks at a symposium on climate change hosted by the Pontifical Academy of Sciences at the Vatican, Governor Edmund G. Brown Jr. on Saturday called on global faith leaders to help “awaken the world” to the threat of toxic carbon pollution.

“Until religious leaders from every part of the globe and from every denomination are engaged, we’re not going to be able to move aside the huge rock of indifference, complacency and inertia,” said Governor Brown. “Going forward we’re going to have to find the pathway to awaken the world to get done what needs to be done.”

The three-day Vatican symposium, “Health of People, Health of Planet and Our Responsibility: Climate Change, Air Pollution and Health” featured dialogue between dozens of scientists, scholars, NGO leaders, theologians and policymakers from around the world on the interconnections between fossil fuel use, the pollution of the atmosphere and the oceans, climate change, public health, sustainability and the health of ecosystems. Recommendations based on these discussions will be submitted directly to Pope Francis and other world leaders.