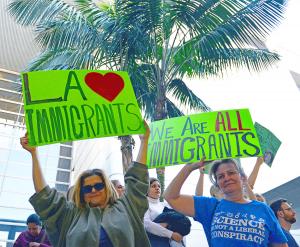 Approval of the bill is seen as defiance of President Donald Trump’s immigration policies.

Senate Bill 54, the “sanctuary state” bill, was passed by a 27-12 vote along party lines on Monday evening, with Democrats supporting the measure and Republicans s opposing it. The bill will go to the State Assembly, where Democrats hold a majority, and if approved, to Democratic Gov. Jerry Brown.

Senate President Pro Tem Kevin de Leon, who introduced the bill, called its passage a “rejection of President Trump’s false and cynical portrayal of undocumented residents as a lawless community.”