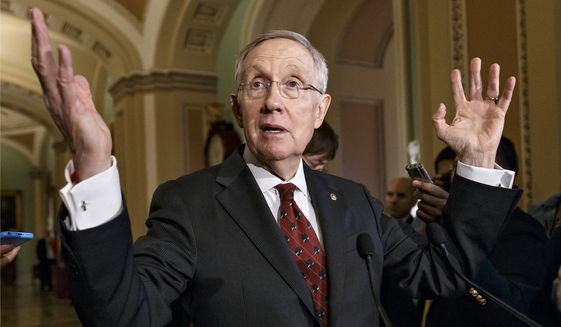 Senate Majority Leader Harry Reid has become a major focus of the 2014 campaign, with many of his embattled fellow Democrats declining to say whether they’d back him for their party caucus leader.

While President Obama may have poisoned the political environment for those Democrats, it is Mr. Reid who shaped the records they are defending — keeping them from having to take tough votes, but at the same time ensuring they didn’t have a chance to show much independence from the national party.

That’s left both incumbents and potential newcomers striving to distance themselves from the Nevada Democrat, who has run his party caucus for 10 years and has been majority leader for eight.

“I know how to say ‘No’ to Senator Reid,” Michelle Nunn said earlier this week at a debate in Georgia, where she is the Democrats’ nominee in a race for an open Senate seat.

Incumbent Democratic Sens. Mary L. Landrieu in Louisiana, Mark R. Warner in Virginia, Mark Begich in Alaska, Jeanne Shaheen in New Hampshire and Mark Pryor in Arkansas have also seemed to distance themselves from Mr. Reid, as has Allison Lundergan Grimes, the Democratic nominee in Kentucky.

Several have refused to say whether they would support Mr. Reid as their leader in the new Congress that begins next year, seeming to suggest that they were getting fed up with the stifling hold Mr. Reid has kept on the chamber.