by Jane Musgrave I The Palm Beach Post
September 10, 2020 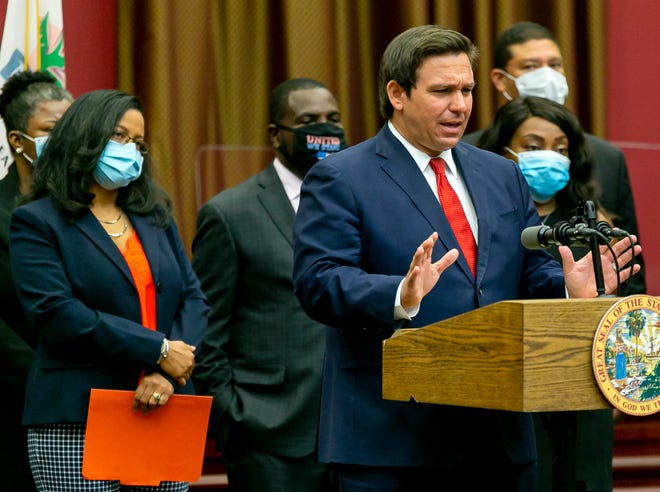 To short-circuit a legal fight, Gov. Ron DeSantis on Wednesday gathered Black leaders, including his embattled Florida Supreme Court nominee Renatha Francis, to insist that having a Black woman on the high court is more important than obeying the law.

Never mentioning that the Florida Supreme Court had unanimously ruled that his appointment of Francis was unconstitutional, DeSantis instead focused on the Jamaican-born immigrant’s hard-knocks life story of overcoming adversity to become a Miami-Dade and then a Palm Beach County circuit judge.

“She would be an inspiration to all the little girls growing up in Florida,” DeSantis said, blasting a Democratic state representative for filing a lawsuit that could thwart Francis’ meteoric rise through the judicial ranks.

Black leaders who joined DeSantis at the carefully staged event in Miramar praised DeSantis for trying to diversify the court which, for the first time in nearly two decades, is composed only of white men.

“She would represent not only her family, not only her former island of Jamaica, but every women, every Black person, every immigrant and every Floridian,” said Miramar Mayor Wayne Messam.

The overtly political gathering came as the high court signaled that it might block Francis’ appointment and force DeSantis to pick one of seven other lawyers who have been vetted for one of the state’s most powerful posts.

The appointment, which was questionable when DeSantis made it in May, became complicated when Florida Rep. Geraldine Thompson, D-Windermere, filed suit in July to block it.

It was further complicated when the high court ruled on Aug. 27 that Francis was ineligible to serve because the Florida Constitution requires justices to have been members of the Florida Bar for 10 years. The 42-year-old Francis won’t pass that milestone until Sept. 24.

However, instead of immediately ordering DeSantis to select one of the other candidates, the court punted.

It wasn’t until Tuesday that it agreed Thompson could amend her lawsuit and ask that DeSantis pick one of the finalists for the post. It gave DeSantis 24 hours to explain why he couldn’t do so.

During the press conference, DeSantis mocked Thompson for filing the lawsuit.

“The problem I have in this case is that this particular representative has been vocal about having a Black justice on the Supreme Court,” he said. “This lawsuit is totally undermining what you said you wanted to do.”

Members of the Florida Legislative Black Caucus and other Black leaders also criticized Thompson. They begged her to drop the lawsuit even though another nearly identical one has been filed to keep Francis from joining the court.

While Thompson couldn’t be reached for comment, she originally asked that the search for a new justice begin from scratch. That would have potentially led to the selection of a Black judge or lawyer who was eligible for appointment.

However, the Supreme Court said it didn’t didn’t have the legal authority to grant Thompson’s initial request. So, she amended her lawsuit, asking that DeSantis be forced to appoint a justice from the existing list, which had been forwarded to DeSantis by a judicial nominating committee.

Of the seven state appeals court judges on the list, none are Black. Four are women.

Those who were watching the political theater from afar said DeSantis had plucked a page from the playbook of his political mentor, President Donald Trump.

“You create a crisis and then you blame your enemies and you tell people you’re the only one who can solve the crisis,” said Robert Jarvis, a law professor at Nova Southeastern University.

Like others, including Florida Supreme Court Justice Jorge Labarga, Jarvis said there are many highly qualified Black judges and lawyers who would be good additions to the high court.

But, he said, most don’t have Francis’ other attributes: A young lawyer, who is a member of the conservative Federalist Society and is supported by pro-life groups. “She checks all the boxes,” Jarvis said.

Enlisting the help of Black leaders, was a brilliant touch of political savvy, he said.

“DeSantis is in a no-lose position,” he said. “He gets his pick or he gets to say to minority leaders, ‘Look, I tried but that mean Supreme Court blocked me.’ I think DeSantis is being very clever.”

Still, others said they are disturbed that DeSantis, a Harvard Law School graduate, isn’t abiding by the Florida Constitution.

“The rule of law is that in order to be qualified to serve on the court, you have to have a certain number of years of experience,” said attorney John Howe, the first Black president of the Palm Beach County Bar Association.

Francis simply doesn’t have the qualifications and DeSantis should appoint someone who does, he said.

“It reeks of cronyism,” he said of the selection that he worried could be based on some other factor than Francis’ legal acumen.

Attorney Richard Ryles, agreed. “It stink of politics to me,” he said.

Like Howe, he also said the rule of law is important. “We as African Americans are accustomed to there being a wink and a nod when it’s used against us,” he said. “We should be steadfast and forthright against that even when it works in our favor.”

However, other Black leaders described the requirement as a mere technicality. In two weeks, Francis will have been a member of the Florida Bar for the required 10 years, said Broward County Mayor Dale Holness.

“We have just a few days separating that timeline,” said Holness, adding that he’s been friends with Francis’ husband, Phillip Fender, for more than 35 years.

Francis did not leave the argument to save her spot on the high court to others.

Handed the microphone, she recounted her story of growing up in Jamaica and running two businesses, while raising a younger sibling and going to school. When she moved to South Florida, she said she worked to put herself through Florida Coastal School of Law.

After working as a clerk for the 1st District Court of Appeal in Tallahassee, she got a job at the powerful Shutts & Bowen law firm. One of the partners, Daniel Norby, is chairman of the judicial nominating committee that nominated Francis for the post. He was also general counsel to former Gov. Rick Scott.

It was Scott who gave Francis her first judicial appointment. In 2017, he tapped her to become a Miami-Dade County Court judge and a year later elevated her to the circuit bench.

Last year, she applied for a vacant Palm Beach County circuit judgeship. She said her husband had gotten an unspecified job in the West Palm Beach area and she didn’t want to split her young family.

Although 40 local lawyers applied, she made the short-list and was appointed by DeSantis in October.

That appointment rankled many local attorneys who said it was unusual that someone who didn’t live in the county would become a circuit judge.

That Tuesday’s news conference was held in Broward County is telling, Ryles said. Having served on the Palm Beach County bench for less than six months, she had little support here, he said.

But, those who joined DeSantis on the Miramar stage, insisted that as a Black woman and an immigrant, Francis will represent those whose voices are often not heard.

“It’s a travesty if we allow the only candidate of color to be stricken,” Messam said. “That’s embarrassing. It’s unjust. It’s not reflective of who we want to be.”