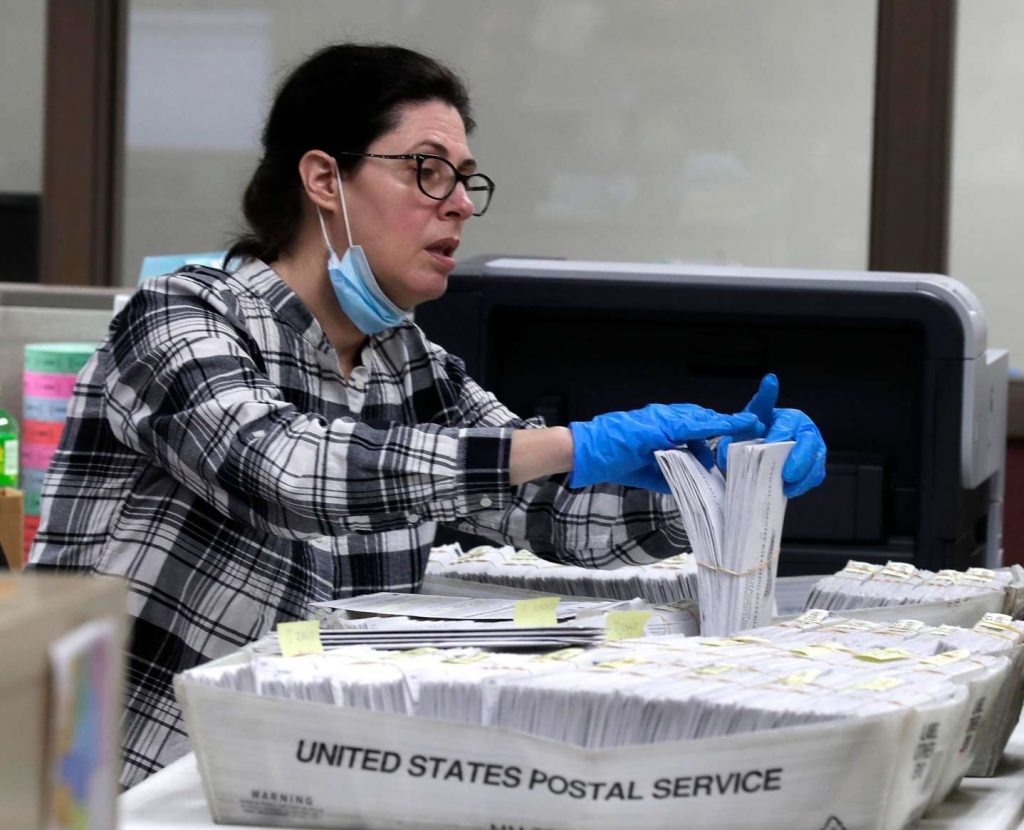 MADISON – A federal judge slammed Gov. Tony Evers and lawmakers Wednesday for ignoring their responsibilities by not postponing next week’s election because of the coronavirus pandemic as the Democratic governor prepared to deploy the National Guard to help at the polls.

“The State of Wisconsin’s Legislature and governor are not willing to step up and say there’s a public health crisis and make it absolutely clear that we should not be allowing poll workers and voters to congregate on April 7,” U.S. District Judge William Conley said near the end of a four-hour hearing.

Conley said he did not believe he had the power to delay Tuesday’s election but would consider making some changes to voting rules. He said those who have brought lawsuits could come back to him after the election if they believe large numbers of people were disenfranchised.

Conley gave his views of the case as Democratic presidential candidate Bernie Sanders called for delaying the election and Milwaukee Mayor Tom Barrett — who is on Tuesday’s ballot — said voters should vote absentee instead of going to the polls. Voting in person will be dangerous, Barrett said.

Conley was unsparing in his criticism of Evers and Republicans who control the Legislature, saying they should be protecting the public during a worldwide pandemic that has killed nearly 47,000 people and shut down large parts of the economy.

He compared running an election during the coronavirus outbreak to conducting one during a deadly storm.

“You expect the State of Wisconsin to realize this is a hurricane and prevent (the election) and stop it for public health reasons,” he said.

But Conley said he’s limited in what he can do.

“I don’t see a basis on which I can stop this, albeit it’s a very risky decision by the State of Wisconsin,” he said.

Evers, Senate Majority Leader Scott Fitzgerald of Juneau and Assembly Speaker Robin Vos of Rochester have repeatedly said the election should be kept on schedule and clerks should try to do the best they can with difficult circumstances. For weeks they have urged people to vote by mail instead of going to the polls on election day.

Evers said late Wednesday he wanted to change how the election was conducted but didn’t have the power to do it on his own. Fitzgerald said Evers and other Democrats were acting like cowards by claiming their options for handling the election are limited.

On Tuesday’s ballot is the presidential primary, a crime victims rights amendment to the state constitution and elections for state Supreme Court and local offices. Thursday is the last day to request an absentee ballot.

Election officials, meanwhile, warned that without changes voters and poll workers could be sickened and ballots could go uncounted.

“In my opinion, the (Wisconsin Elections) Commission knows there are going to be many, many ballots that are legitimate that aren’t going to be counted” unless voting rules change, said Mark Thomsen, a Democrat who sits on the commission.

“We really are at a crisis here.”

Decision to come soon
Conley, who was put on the bench by President Barack Obama, suggested he would make some changes to Wisconsin’s voting policies, such as by allowing absentee ballots to be counted if they arrive in clerks’ offices after election day, provided they are postmarked by then.

He also raised the possibility of allowing some absentee voters to have their ballots counted without the signature of a witness. But he said he was inclined to allow that only in limited cases and he expressed skepticism at the notion of suspending the state’s voter ID law, noting it has survived a litany of court challenges.

“That argument has been made and lost in court,” he said.

Conley is considering the case amid a severe shortage of poll workers that has forced some communities to greatly reduce the number of polling places they have.

Meagan Wolfe, the head of the state Elections Commission, raised the prospect in court testimony that some voters may have to go to a different town on election day because no one will be willing to work the polls in their own municipality.

A shrinking number of polling sites will increase the chances of long lines even though people are supposed to stay away from one another. Milwaukee, which ordinarily has 180 polling locations, could have fewer than a dozen for this election — and as many as 50,000 voters could show up at them, according to the Milwaukee Election Commission.

More than a million absentee ballots have been requested in Wisconsin — a record number that clerks have not been able to keep up with. Under the law, ballots must be returned by election day, but clerks fear they may not get many of them because of slow mail service.

Conley is weighing three legal challenges that he has combined into one case. The most sweeping of them — brought by Souls to the Polls and other voter mobilization groups — is asking to postpone the election.

Conley repeatedly expressed reservations Wednesday about going that far, saying those bringing the lawsuit wanted him to halt the election because they believed turnout would be abysmal, especially among minorities.

“Maybe you’re right, but why wouldn’t I under principles of federalism allow the state to try it?” Conley said. “And the only reason is because it’s a really bad public policy idea and (state officials) should stop it for health reasons”

Responding to Conley’s comments, Evers said he, lawmakers and the courts all should play a role in deciding how to conduct the election.

“If I could have changed the election on my own I would have, but I can’t without violating state law,” he said in his statement. “I’ve asked the Legislature to do its part to ensure a fair and safe election and I hope we can get some clarity as soon as possible.”

While Evers wants some changes, he still wants in-person voting to occur Tuesday. He has he said the election should not be moved because the pandemic may be worse this spring or summer. He’s also raised concerns about leaving local offices unfilled if the election isn’t held as scheduled.

Last week he proposed having the state mail absentee ballots to every registered voter. Republicans called the notion a joke because he proposed it so close to the election that there would not be time to print and mail so many ballots.

In a statement after the hearing, the Senate majority leader suggested Evers was trying to give himself cover by putting responsibility on Republican lawmakers.

“Not once has the governor suggested moving the election date. In fact, not a single Democratic legislator has even introduced a bill that would move the election date,” Fitzgerald said in a statement. “For Democrats to suggest now that their hands were somehow tied is pure cowardice.”

In a friend-of-the-court filing late Tuesday, Evers said he would deploy the Wisconsin Army National Guard to help at the polls but said the clerks would still face a shortage of poll workers. Nearly 60% of Wisconsin’s communities have fewer poll workers than they need, including more than 100 that say they have no poll workers at all.

In comments to reporters Wednesday before the hearing, Vos and Fitzgerald said they felt safe at the polls. Vos plans to work as a poll worker Tuesday.

“I would certainly say that I feel safe being there because of the safeguards that are being put in place,” Vos said. “If you’re bored at home and you’re sick of watching Netflix, volunteer to go and help at the polls.”

The Souls to the Polls case heard Wednesday has been combined with ones brought by the Democratic National Committee and League of Women Voters of Wisconsin.