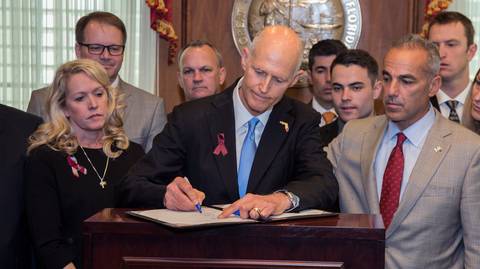 Florida may have become the unlikely launchpad for modern gun-safety activism in the wake of one of the country’s worst school shootings, but the Sunshine State is quickly returning to its Gunshine State roots.

A year after one of the country’s most conservative state Capitols passed sweeping gun-safety and mental health legislation after 17 people were killed in Parkland, Florida looks poised to pass a bill that expands a new and voluntary school security program by allowing trained and vetted classroom teachers to carry guns.

The proposal, a revived provision cut from last year’s Parkland-motivated legislation in order to secure its narrow passage, passed out of committee Thursday in the Senate and will now move to the floor for debate. Its renewal as part of a broader school safety bill has troubled the same activists who in 2018 held up Florida’s actions as proof of changing attitudes toward gun laws.