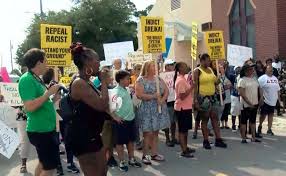 Florida’s “stand your ground” law is being tested again after a 28-year-old father was mortally wounded in front of his young children following an argument with another man over a handicapped parking space.

The State Attorney’s Office is expected to review the case and make the final decision on whether it falls within the claim of self-defense — under a law that first gained prominence in the 2012 shooting death of unarmed black teenager Trayvon Martin. State prosecutors could not immediately be reached for comment Monday.

Surveillance video taken from the Circle A convenience store in Clearwater last Thursday showed Markeis McGlockton, his girlfriend Britany Jacobs and their three young children pulling into a handicapped spot. McGlockton ran into the store with their 5-year-old son.

A man in a light-colored hat — later identified as Michael Drejka, 47 — went up to the car, and he and Jacobs got into a spat.