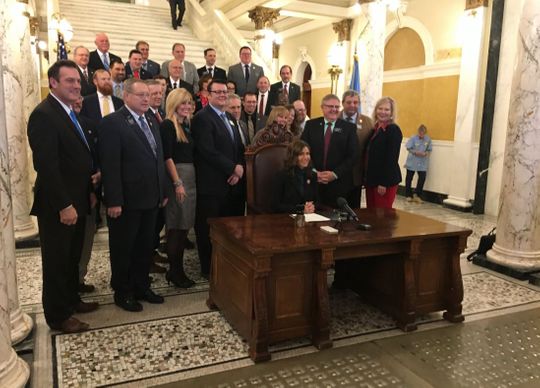 PIERRE — South Dakotans will be able to carry concealed handguns without a permit beginning July 1.

Less than a month into office, Gov. Kristi Noem fulfilled one of her campaign promises on Thursday by signing the bill repealing the requirement into law. She said she was “proud” that it was the first bill she signed as governor. Republican legislators who championed the bills stood in a crowd behind her as she signed the bill at a desk in the Capitol Rotunda, applauding after her signature turned it into law.

“It’s special for me to be signing a bill into law that protects our Second Amendment rights,” Noem said afterward.

The bill, sometimes called “Constitutional carry,” gives residents the option to choose the best method for themselves — residents can still obtain a concealed carry permit for reciprocity — and it keeps the restrictions in place on who can carry a concealed handgun, she said. It’s been debated and vetted in the Legislature over the past several years and the “robust and thoughtful process” has resulted in the bill’s passage, she said.