In Florida, as race tightens, Biden outlines a plan for Puerto Rico’s recovery 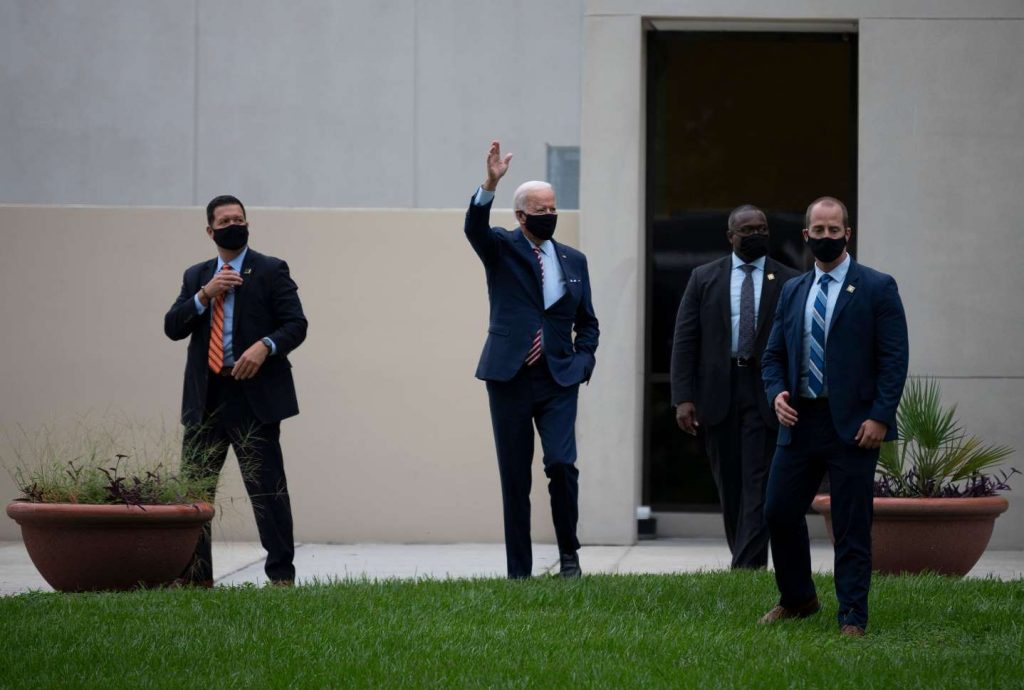 MIAMI — During his first visit to Florida as the Democratic presidential nominee, Joe Biden on Tuesday appealed directly to hundreds of thousands of Puerto Rican voters living in the state by releasing a long-awaited plan to help their bankrupt and storm-battered island rebuild and shed its crippling debt.

Biden — who acknowledged Monday that he needs to “work like the devil” to win over more of Florida’s Hispanic voters — stopped short of endorsing Puerto Rican statehood, among the highest profile political issues hanging over the U.S. territory. He restated a plan to work with representatives of the different positions on the island’s political status to “engage in a fair and binding process to determine their own status.”

But he promised to cut red tape bogging down federal assistance, pledged to expand healthcare on the island, and swore to end policies of the administration of President Donald Trump and even former President Barack Obama, under whom Biden served as vice president.

“Today’s a historical day for Puerto Rico and the Puerto Rican community,” Javier Cuebas, coalitions director for Biden’s Florida campaign, told reporters Tuesday on a conference call. “No president or presidential candidate has ever provided a plan as comprehensive as the one we have in front of us.”

Biden, whose last visit to Florida came in September 2019, prior to the coronavirus pandemic, stopped in Tampa early in the afternoon to meet with veterans and then planned to travel to Kissimmee near Orlando to talk with Puerto Rican voters.

His new Puerto Rico plan on how to help the weary island of about 3 million U.S. citizens — not including the more than 1 million who live in Florida — comes amid indications that the race for president is tightening in the nation’s most populous swing state. Recent polls have also shown Biden lagging among Hispanic voters in the state, a key Democratic constituency that makes up 17% of Florida’s registered voters. Puerto Ricans number more than 1 million in Florida, and comprise about one-third of Florida’s Hispanic voters.

As Biden flew into Tampa Tuesday, Florida’s Cuban-American Lt. Gov. Jeanette Nuñez dismissed his efforts to court Hispanic voters as too little, too late. She said continuous visits by Trump and Vice President Mike Pence have showed Hispanic voters that Trump cares about them outside of campaign season.

Puerto Ricans, especially, are crucial to Biden’s chances of victory in Florida, now home to the largest mainland community of Boricuas. They have emerged as a counter-balance to conservative-minded Cuban Americans in the state, and have expressed widespread discontent with Trump, who has denied the death toll of 2017’s Hurricane Maria on the island and pulled funds from the U.S. territory to help build his border wall.

“Trump’s response to the devastation caused by hurricanes Irma and Maria have been abysmal,” said Biden’s deputy campaign manager, Julie Rodriguez. “He’s raided reconstruction funding to build his wall and made it harder to access funding provided by Congress for reconstruction.”

But dissatisfaction with Trump’s policies and actions doesn’t necessarily guarantee a vote for Biden. Two years ago, when Democratic candidates narrowly lost races for governor and U.S. Senate, strategists bemoaned a lack of outreach by their campaigns to Central Florida’s massive Puerto Rican communities.

Hoping to avoid a repeat of that scenario, Democratic nominee laid out his plan Tuesday for how he’d help rebuild Puerto Rico’s power grid, boost its economy and expand healthcare services.

For the first time, Biden detailed specific steps he would take to improve public healthcare on the island, promising to address “chronic underpayments” by the federal government to Puerto Rico’s Medicare Advantage system and to double the federal investment in community health centers on the island. He also said he’d expand access to COVID-19 healthcare services in Puerto Rico.

His plan also lays out a series of proposals to speed up the process to make federal funds available for Puerto Rico government agencies, an issue that the island has been facing in its recovery from Maria. The plan said he would instruct the U.S. Department of Housing and Urban Development to “remove onerous restrictions unique to Puerto Rico” that limit federal disaster funds made available through Community Development Block Grants.

His advisers could not specifically say how he would make that happen.

Additionally, Biden admitted that the board to administer the island’s finances, created under the Obama administration through the Puerto Rico Oversight, Management and Economic Stability Act law of 2016 — known as PROMESA — needs “a meaningful shift in approach.” He said that when the PROMESA law was passed, no one envisioned hurricanes, earthquakes and a pandemic would layer natural disasters on top of a financial disaster on the island.

But rather than repealing the law, Biden proposed working within the current structure to clarify elected officials’ role and to “chart a new path” for the board. He also said he wants to audit the island’s reported $74 billion debt.

“I think the vice president is open to approaching that in the way most expedient to the people of Puerto Rico,” Carmel Martin, a senior adviser to the Biden campaign, told reporters. “He’s open to the possibility that legislative action may be necessary but also eager to look for ways to move forward under the current structure if possible. We want to maintain flexibility in terms of how to approach it but recognize … significant changes need to be made.”

The most prominent position of his platform — his position on statehood — was not new. Biden pledged late last year in a op-ed published in the Orlando Sentinel to work with representatives of the different positions on Puerto Rican statehood to determine the island’s status.

But as Biden visited Florida Tuesday, the state’s sole Puerto Rican member of Congress introduced a resolution that would call Congress and the president to take action next year if Puerto Ricans vote for statehood in this November’s referendum.

“Come November, Puerto Rico has a new opportunity to take a step forward in addressing its status,” said U.S. Rep. Darren Soto, who represents Kissimmee. “On the first day of Hispanic Heritage Month, the introduction of our resolution is about respecting democracy and the will of the people of Puerto Rico. If Puerto Ricans vote for statehood, we must take action to admit the 51st state of our union.”

“The 3.2 million American citizens residing in Puerto Rico deserve equality including the right to vote for their president and members of Congress as well as equal treatment in federal programs,” González Colón said in a statement. “We will do our utmost to ensure that Congress grants Puerto Rico statehood if the voters choose this status option in the upcoming plebiscite.”