In Texas GOP primary, it’s who can love Trump the most 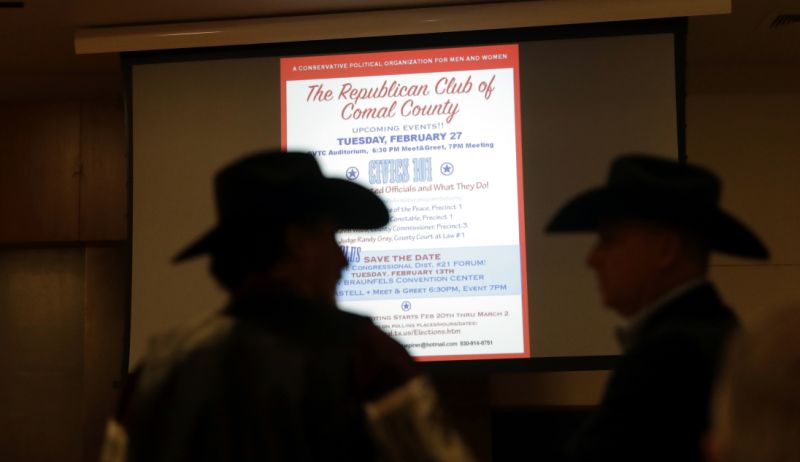 George P. Bush’s campaign flyers in Texas declare that he’s “standing beside our president” — the one who called his dad, Jeb, an embarrassment to his family and a pathetic person.

At a political forum outside San Antonio, another Republican candidate brags about his “bigly” wins over Democrats. Another hopeful in Houston, just days after a mass shooting at a Florida high school killed 17 people, sent voters a photo of herself holding an assault rifle — below the words “Kathaleen Wall stands with Trump.”

Texas holds the nation’s first 2018 primary elections Tuesday, and the campaign is providing a vivid exhibition of the Trump effect in GOP politics. Some races are playing out in a roadshow of one-upping emulation of the combative president, in which there’s no such thing as cozying up too close or too ardently, regardless of his rough edges or low approval ratings nationwide.

“I’m Robert Stovall, and like President Trump, I realize the swamp is the problem,” begins a campaign ad for Stovall, a San Antonio Republican Party leader now running for Congress. He stands in a literal swamp wearing a “Make America Great Again” hat and cocks a shotgun at the end.

It’s like nothing seen before in Texas politics, even when a Texan was in the White House. Love of George W. Bush’s style of big government conservatism wasn’t a staple of campaigns here. A decade later, his nephew George P. Bush, the Texas land commissioner, is thanking President Donald Trump’s son Donald Trump Jr. for endorsing him in his bid for re-election.