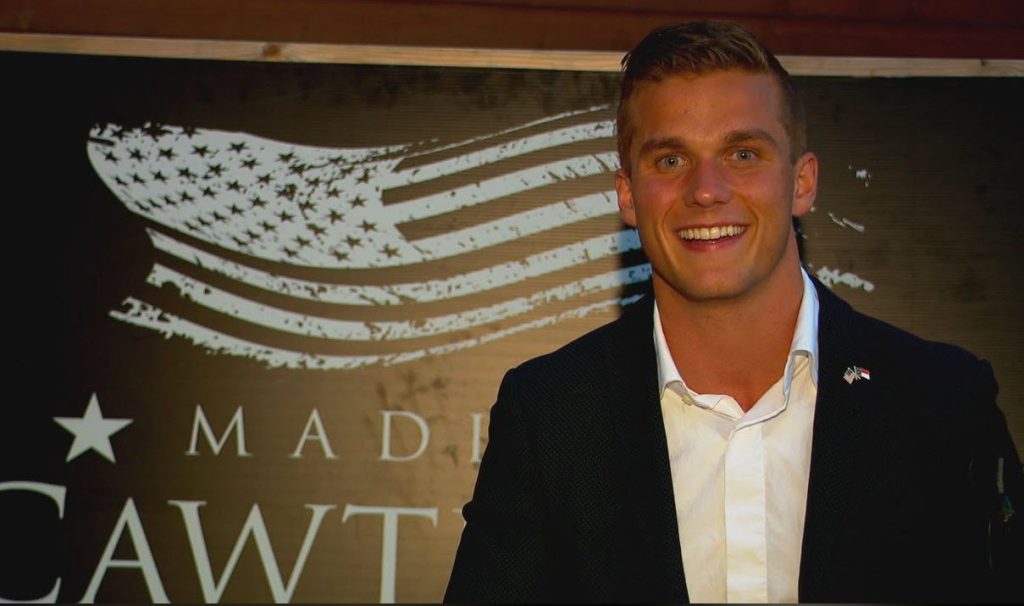 Madison Cawthorn won’t dare criticize “our great president,” despite President Trump’s siding with his Republican primary rival in a contest the 24-year-old ended up winning.

But Cawthorn will call out the Republican party for lacking empathy, something he said will win him Mark Meadows’s old congressional seat as the party’s nominee in November — virtually a sure thing in a Western North Carolina district where in 2016 Trump beat Democratic rival Hillary Clinton by a 17-vote margin.

“My voters were not out there voting against Donald Trump, but the people of Western North Carolina do not take well to cronyism,” Cawthorn, 24, told the Washington Examiner at his home, straddled on either end of his dining room table by busts of Julius Caesar and Cleopatra.

Conservatives from this part of the state don’t take well to people telling them what to do, or who to vote for, he said.

“They were very discerning people,” he said of his 40,000 primary voters. “They’re individualistic, they’re rugged. They don’t take well to outsiders. And you know, they said, this is the son of our mountains.”

Cawthorn on Aug. 1 will turn 25, the minimal age to be a House member, under the Constitution. He’ll join a small handful of lawmakers who entered the chamber at that rarified age, and the first since the mid-1970s. When the 117th Congress convenes on Jan. 3, 2021. He’ll be the youngest lawmaker on Capitol Hill by far, eclipsing the current holder of that honor, first-term Rep. Alexandria Ocasio-Cortez, the firebrand left-wing first-term New York Democrat, who will be 31 at the start of the new Congress.

What life experience he lacks, Cawthorn said, he has in overcoming adversity.

“In my short life, the 24 years, I have experienced more pain and more suffering than the overwhelming majority of people go through,” he said, describing the automobile accident at age 18 that left him partially paralyzed and using a wheelchair.

The spinal cord damage he suffered and third degree burns on his left leg still cause momentary pain so intense that he crosses his muscular arms, clenches his teeth and breathes deeply for a few seconds until the burning sensation passes.

“That has taught me something that is, I believe, absolutely missing in conservative politics. And that is empathy,” he said.

With just a year of college — he was supposed to attend the Naval Academy until his accident — Cawthorn is a student of ancient Rome and Athens, quoting examples of democracy and infrastructure from the democracies.

“Healthcare and infrastructure go back and forth, which is my number one issue,” he said.

District 11 suffers a shortage of rural hospitals and was hard hit in recent years by the opioid crisis. The impact of the coronavirus and battered tourism sector has made the problem acute for many of the undecided voters he will appeal to.

While clarifying that he supports the president’s call to repeal Obamacare now, Cawthorn believes there is an economic solution rooted in the free market.

“I feel like for so long, we have been the party of, ‘No,’” he said, noting it’s a hard sell to voters to repeal the Affordable Care Act with no alternative.

“How are you getting people to vote for that when you’re not telling what you want to do, put in its place? We have to have some ideas,” he said.

His solution is to repeal and deregulate.

“Let’s go back to the Wild West. Let’s let people compete for our dollars,” he said.

Cawthorn glided across the seamless wood floors to the favorite part of his home, an outdoor stone patio where he toasted at 1:30 a.m. with some 30 friends and family after his primary run-off victory.

“Having the respect of people you respect is a very touching thing,” he reflected.

One of the people that he respects is President Trump, who called him from Air Force One to congratulate him when he was driving home with his fiancée, an anesthesiologist assistant.

“Madison, what a beautiful win,” Cawthorn gleefully remembers the president telling him. “I mean, he was, he was so proud of me.”

Cawthorn thanked the president for not bashing him in the primary.

“He could have thrown some punches much harder at me had he chosen to,” Cawthorn said, with his German Shephard Beowulf seated next to him.

Cawthorn snapped a finger and yelled a German command to his trained attack dog, which also serves as his hunting partner.

Sitting in a stall in a cornfield to hunt dove or deer is no problem with a wheelchair, outfitted with rugged, thick tires like a mountain bike, he said, but duck hunting in the marsh is more challenging.

“I have found that you can do anything with a proper amount of time and preparation,” he said.

Cawthorn explained how its done. He doesn’t even bring a wheelchair.

Friends climb his 4×4 ATV with a mounted winch and they drive through the marsh. When they reach the water’s edge, they wrap the winch cable around a tree opposite the water and hook it to his kayak.

Cawthorn is helped onto the kayak and activates the winch, which pulls him to the middle of the water. Unwrapping from the tree, he reconnects and is pulled back to the ATV.

“I don’t know that we need another attorney representing us,” he said of the former Guantanamo Bay prosecutor.

Then he paraphrased James Madison’s Federalist Papers, saying the founding father deliberately set the bar low for entry so that a cross-section of America will be represented.

Cawthorn, whose work experience prior to starting his own business consists of motivational speaking, work at Meadows’ congressional office and lead manager at Chick-fil-A.

Cawthorn said he gets why “Zoomers,” or the generation like him born after 1995, and Millennials, born after 1980, struggle with modern politics.

“We have had a major problem with messaging in our party for so long,” he said.

Cawthorn agrees with issues like border security, but he says he is better at explaining conservative messages in an appealing way that doesn’t offend.

He frequently picks up his phone to demonstrate how short, adept videos, Twitter and Instagram posts can communicate a conservative message clearly.

“There’s a reason why a lot of us are put off by the harsh rhetoric of the right, but also don’t like the virtue signaling on the left. And so it’s hard to identify with a party,” he said. “What I give them is that I represent the common man. I really represent the average American.”

Cawthorn, wearing his older brother’s blue North Carolina State polo, knows most don’t have the privilege he had from a good upbringing. Insurance settlement money related to his accident helped pay most of his $3 million in hospital bills.

His financial adviser parents and brother helped him invest some of the settlement money in a way that allowed him to start his own real estate investment business and self-finance his campaign to the tune of $200,000.

“I wasn’t on his side when they did that poll,” he said. “I will secure the millennial vote and the Western North Carolina for him.”

Cawthorn had to postpone his wedding for his campaign. But his confidence for a win in November is already part of his wedding planning.

“Lord willing that I win this campaign, it’ll probably be for the Easter break,” he said.