KENTUCKY CLERK COULD HEAD BACK TO COURT OVER LICENSES 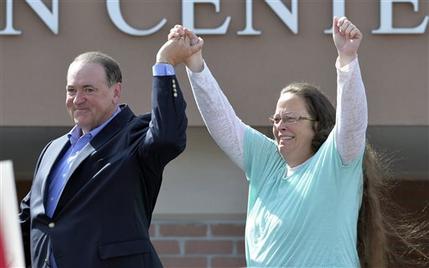 FRANKFORT, Ky. — She’s already spent five days in jail, and now a Kentucky clerk could be back in court soon for altering marriage license forms issued to same-sex couples.

Monday, lawyers for two gay couples and two straight couples questioned the validity of the new marriage licenses and asked a federal judge to order Rowan County Clerk Kim Davis’ office to reissue them. If she refuses, the lawyers asked the judge to put the office in receivership and have someone else do it.