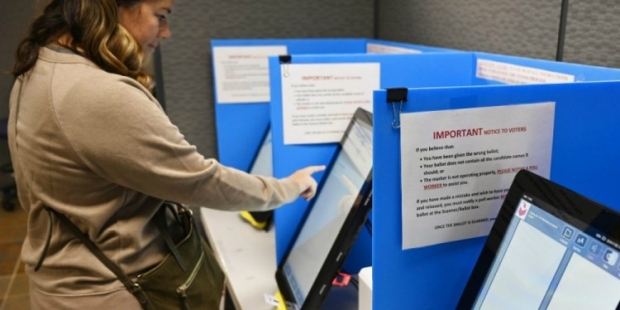 A Michigan judge ruled the state can release the names of the so-called “forensic investigators” who compiled a report about Dominion Voting Systems machines in Antrim County.

Judge Kevin Elsenheimer of the 13th Circuit ruled against the plaintiff on Monday, saying that stopping the release of the investigators’ identities would be “extraordinary,” the Detroit News reported. Resident William Bailey, who is represented by attorney Matthew DePerno, filed the lawsuit alleging unfounded claims of electoral malfeasance.

Last month, Elsenheimer, a former Republican state lawmaker, allowed the release of a report compiled by the Allied Security Operations Group, a Dallas-based firm affiliated with other failed legal challenges in battleground states President-elect Joe Biden won on Nov. 3. Ahead of the report’s release, the state warned about a “group” of bad-faith actors who sought to spread disinformation about the Antrim County results.

The county was under scrutiny by President Trump and his allies after some 6,000 votes were incorrectly tabulated for Biden instead of Trump in an initial tally. The problem was quickly fixed and attributed to human error rather than that of Dominion Voting Systems. But the focus of the lawsuit, brought by Antrim County resident William Bailey, is a challenge to a local marijuana retailer proposal that passed by a slim margin following a retabulation not factoring in three damaged ballots.

Dominion CEO John Poulos rejected the claims in the ASOG report, testifying under oath in December that the findings were “severely flawed,” released by a “biased” group, and “categorically false and technically incomprehensible.” A hand-count audit found a deviation of just a dozen votes from the first tabulation.

DePerno argued Monday in court that the names of the “forensic investigators” shouldn’t be released to the public because of a risk to their safety and threats that he and others have received. He also attacked Michigan Attorney General Dana Nessel, who intervened in the case on behalf of Secretary of State Jocelyn Benson, as “extremely partisan and militant.”

Elsenheimer disagreed with DePerno’s arguments and allowed the release of the names but said that phone numbers, addresses, and other contact information would be withheld from public release.

Nessel, a Democrat, said in a Monday news release that the state would soon be providing the names of the investigators who compiled the report about Antrim County’s voting machines.

“As directed by the judge, our attorneys are drafting the order for the Court to enter and we fully expect plaintiff and his counsel to be forthcoming with those names,” she said.

Biden’s victory was certified in the early hours of Thursday morning after Congress reconvened to count the country’s Electoral College votes following an unprecedented siege against the U.S. Capitol by rioters following a pro-Trump rally that resulted in the deaths of several people. Biden will be sworn in as the 46th president on Jan. 20.