Militia in Flint join calls for justice in water crisis 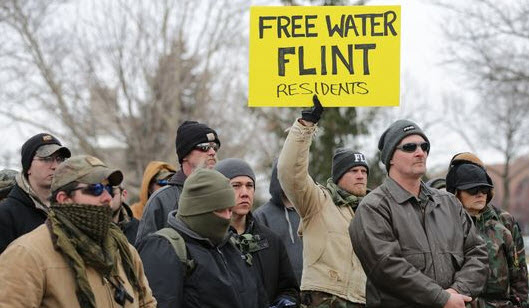 Flint may have seen multiple rallies in recent weeks that called attention to the city’s water crisis — but few if any were as surprising as a rally held by the Genesee County Volunteer Militia.

On Sunday afternoon, about 30 militia supporters clad in camouflage gear and bearing “Don’t Tread on Me” flags, gathered outside of City Hall to demand accountability amid a national discussion over how the city’s water supply became contaminated.

“We’re here to defend this community,” said Matthew Krol, the militia’s executive officer, addressing the crowd in a full camouflage outfit with a handgun strapped to his hip. “We’re not going to allow (the government) to step on the people of Flint any longer.”