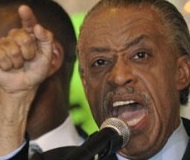 Fox News reporter Leland Vittert got into a heated — and eventually physical — confrontation with activist and MSNBC host Al Sharpton, when the latter tried to keep him from questioning Democratic Baltimore Mayor Stephanie Rawlings-Blake.

“You will have the opportunity,” Sharpton said.

“Then you’ll answer our questions?” he pressed.

“At the press conference, we will answer all questions,” Sharpton said. But as Vittert kept tailing them, a second man stepped between the reporter and the mayor and began pushing him away.