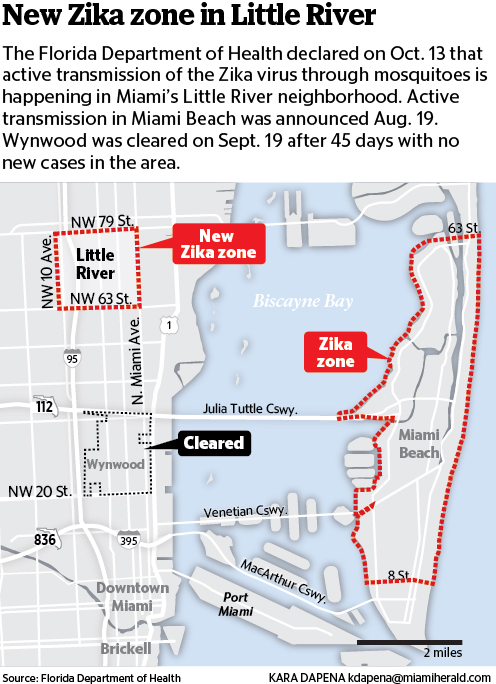 Scott’s office identified the area after the Florida Department of Health confirmed that two women and three men had contracted Zika there. Three of the people live in the one-square-mile area, and two either work there or recently visited, according to the governor’s announcement.

The new zone is the second in Miami-Dade where mosquitoes are known to be spreading Zika. The other is a 4.5-square-mile area of Miami Beach covering most of South Beach and Middle Beach, between Eighth and 63rd Streets from the ocean to the bay.

Miami Mayor Tomás Regalado said Scott called him Thursday afternoon, shortly before announcing the news, to tell Regalado that a new Zika zone had been identified in his city less than a month after state and federal health officials had cleared the Wynwood area of active transmission Sept. 19.

Regalado said he’s concerned about the people who live in the new Zika zone, which unlike Wynwood is primarily residential. The area includes St. Mary’s Cathedral and Athalie Range Park, and two high schools — Miami Northwestern and Miami Edison — border the zone.