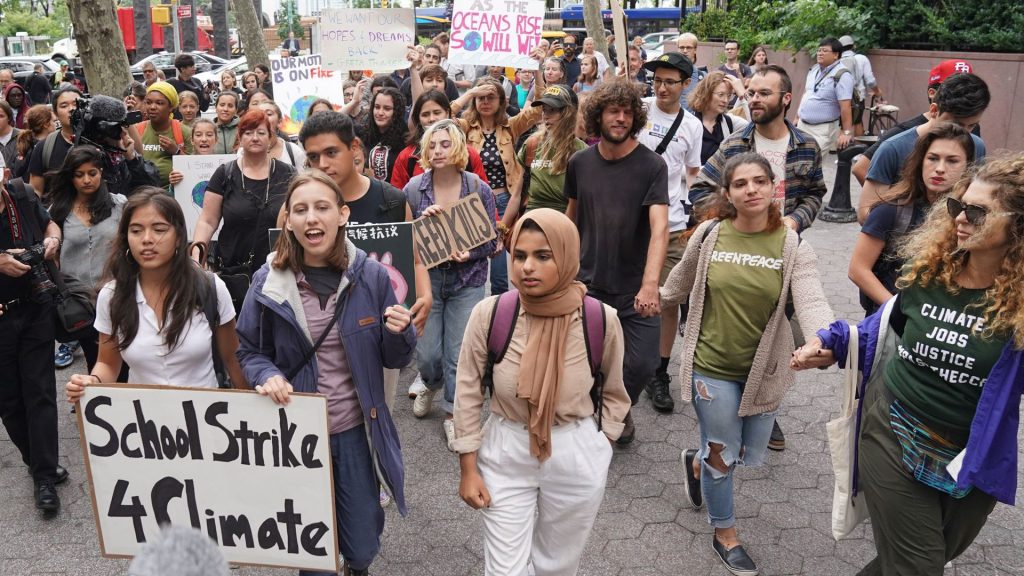 Why it matters: Per the Times, this a test of the movement’s impact — by causing disruptions and getting noticed by political leaders who are in NYC for the United Nations Climate Action Summit 3 days later and the General Assembly meeting that follows it.

Organizers expect millions of people to leave work, home and school to take part in massive climate strike protests around the world.
The big picture: Youth strike advocates Fridays for Future said more than 2400 events were taking place from Sept. 20 through Sept. 27 to coincide with the UN climate summit on Sept. 23, where Swedish climate activist Greta Thunberg is due to make an address.

More than 115 countries and 1,000 cities have registered so far, the group said.
“All eyes are on the United States which already has 145 cities signed up, with participation that is expected to be tenfold when compared with the first two global strikes in March and May of this year.”
What’s happening in the U.S.: The Times reports that large districts around the U.S. were discussing on Monday afternoon the issue of whether to allow students to miss school for the strikes.

A spokeswoman for the Los Angeles Unified School District told the NYT that officials were “still finalizing” plans. Cambridge, Mass., City Council members said they would discuss a motion on Tuesday to excuse students.
The other side: Critics, ranging from climate-change deniers to people who argue for a less radical approach to tackling global warming, said New York City Mayor Bill de Blasio was using school attendance policy to promote a political aim, the NYT notes.

The New York Post’s editorial board called the move “out-and-out government sponsorship of a particular point of view.” There was some concern that a few students could take advantage of the opportunity to skip school for fun, according to the Times.