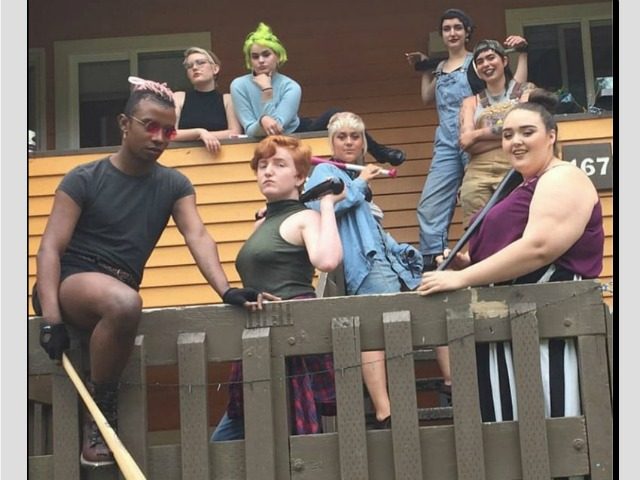 The measure would change the college’s name and official seal to display a brown-shirted, black-masked anarchist trampling on the Constitution and Declaration of Independence.

The measure would also outline the college seal’s design. The measure would design the seal as a “circular seal bearing within the likeness of a young anarchist in a brown shirt, hobnailed jack boots, and a black face mask and hood with the figure’s right arm raised and extended straight and diagonally upward from the shoulder in a totalitarian salute. The figure must be wearing a black armband bearing the term “ANTIFA.” In the figure’s left hand, the figure must clutch to its bosom the book “How to Make a Social Justice Warrior.” The figure must be depicted in the act of vigorously trampling, with muddy, hobnailed jack boots, upon the Constitution, Declaration of Independence, and the Bill of Rights, which must be visibly mangled, torn, and besmirched by these depredations. In the background of the seal to the right, there must be a pile of burning books, with visible titles, including The Holy Bible, The Origin of Species, Philosophiæ Naturalis Principia Mathematica, The Gulag Archipelago, and Simon Wiesenthal’s “Humor Behind the Iron Curtain.” In the background of the seal to the left, there must be a depiction of the current president of the institution, smiling and looking on with approval. Around the seal must appear, in Germanic Gothic font, in a scale that is readily discernible, the institution’s new official motto.”