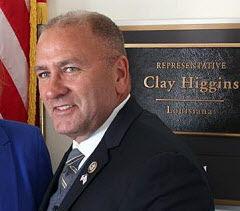 Congressman Ralph Abraham, under attack by his fellow Republican Eddie Rispone in Louisiana’s governor’s race, picked up the first endorsement from the state’s Republican congressional delegation Wednesday with U.S. Rep. Clay Higgins announcing he is backing his colleague.

And Gov. John Bel Edwards won the coveted endorsement from the Louisiana Sheriffs Association, which voted Wednesday to back the incumbent Democrat.

The endorsements come amid the most active week yet in the governor’s race, with the candidates lobbing televised attacks at each other ahead of the first debate Thursday.

Higgins, a Republican representing the Acadiana region, said in a statement that Abraham, who represents north Louisiana, is “the righteous candidate.”

“It has become clear. The path to recovery for Louisiana has now been illuminated. Ralph Abraham is a solid conservative, a dependable ally to President Trump, a very, very good man… and he is my friend,” Higgins said. “He will defeat John Bel Edwards and the liberal machine. He will bring jobs and economic growth back to Louisiana. We, the people of Louisiana need Ralph Abraham as our next governor. He is my brother. He has my full support.”

Until now, Louisiana’s Republicans in Congress have been silent on who they are supporting in the Oct. 12 primary, when Abraham, a congressman representing north Louisiana, will appear on the ballot alongside Rispone, Edwards and three lesser-known candidates.

The Louisiana Sheriffs Association endorsement of the governor comes more than a month after Edwards and Abraham made a pitch for the organization’s endorsement at a forum in Baton Rouge. The governor’s campaign also trumpeted his endorsement by the International Union of Police Associations, which the campaign said represents more than 2,000 police officers in the state.

“I have tremendous affection for law enforcement in general and sheriffs in particular,” Edwards said on his monthly radio show, Ask the Governor. “I’ve had my door open to the sheriffs all four years and I just think that makes a difference.”

Edwards noted he is the the great-grandson, grandson, son and bother of Louisiana sheriffs.

The LSA endorsement was not unexpected; Edwards, whose brother Daniel Edwards is sheriff of Tangipahoa Parish, won the endorsement four years ago in a runoff against former U.S. Sen. David Vitter. The LSA did not endorse in the primary last cycle, when there was no incumbent and none of the candidates could gain a majority of its 64 members.

Higgins’ endorsement of Abraham comes a day after Rispone launched an attack ad against fellow Republican Abraham, a move that rankled many Republicans who fear a similar scenario to 2015, when Republicans waged a brutal primary battle that left David Vitter weakened in a runoff with Edwards. Vitter, a former U.S. senator who was hampered by a prostitution scandal, was defeated handily by Edwards.

Polls have shown Edwards is close to being able to win the election outright in the Oct. 12 primary with more than 50% of the vote, and Republicans fear intraparty attacks will stymie enthusiasm among GOP voters and help Edwards get to that threshold.

On conservative radio host Moon Griffon’s show recently, Higgins was noncommittal about which Republican he would support, and said he has seen polling data that worried him about whether a Republican can win or whether Edwards will win the election outright in the primary. Griffon, an influential voice in conservative circles, especially in Higgins’ district, has slammed the state’s congressional delegation for not doing enough to help the Republicans in the race.

Rispone’s attack ad represented the first major intraparty fight of the campaign. In it, he accused Abraham of lying in a campaign promise to donate his congressional salary to charity, slammed him for missing congressional votes and chided him for not being supportive enough of President Donald Trump when a recording emerged in 2016 of Trump bragging about grabbing women by the genitals. Abraham called the claims “baseless personal attacks” that represent the same strategy that elected Edwards in 2015.

Following the negative ad, an irate Griffon excoriated the move and endorsed Abraham on his show Tuesday. On Wednesday, Higgins went on Griffon’s show to elaborate on his decision to endorse Abraham, suggesting he made the decision because of Rispone’s attacks.

“Upon prayerful consideration and some changes in the tone of the election, I’ve fully endorsed my friend Ralph Abraham for governor for the future of Louisiana,” Higgins said.

Pollster John Couvillon said Abraham could benefit from Republicans rallying behind him in light of the attack ad.

“You’ve got to be careful about how you do negative advertising because the public is already cynical about politicians they see doing or saying anything to win,” Couvillon said.

Rispone, co-founder of industrial construction firm ISC Constructors, has self-funded his campaign, pouring more than $11.5 million of his own personal money into the race and blitzing the TV airwaves.

But he has stalled in the polls at third place, despite vastly outspending his Republican opponent. Abraham has far less money to spend than Rispone or Edwards, with $1.4 million on hand.

The three candidates will face off in the first televised debate of the race on Thursday at LSU. If no candidate wins more than 50% in the Oct. 12 primary, the top two will advance to a runoff on Nov. 16.