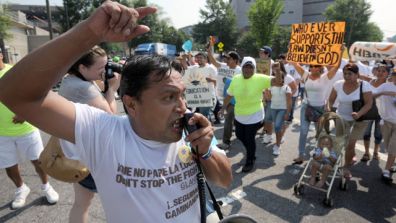 Just 16 percent of likely U.S. Voters think the U.S. government is too aggressive in deporting those who are in the country illegally. A new Rasmussen Reports national telephone survey finds that 62 percent believe the government is not aggressive enough in deporting these illegal immigrants, up from 52 percent a year ago and 56 percent in November. Fifteen percent feel the current number of deportations is about right

But then most voters continue to feel that a child born to an illegal immigrant mother in the United States should not automatically become a U.S. citizen, as is now the case.

Thirty-eight percent favor the current policy of automatic citizenship for these children. Opposition has ranged from 51 percent to 65 percent in surveys since April 2006. Support has been in the 28 percent to 41 percent range in that same period.