Rep. Vern Buchanan Holds Off Thousands of Leftists Who Storm His Town Hall: ‘The Bottom Line Is’ Donald Trump ‘Won the Election’ 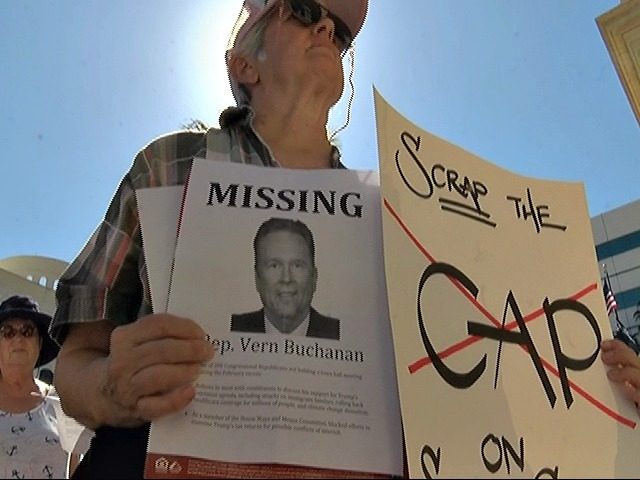 SARASOTA, Florida — Hard left-wing professional activists stormed a town hall held by Rep. Vern Buchanan (R-FL) here on Saturday morning, but the successful businessman-turned-congressman held his own and breezed through a rowdy capacity crowd’s efforts to disrupt President Donald Trump’s agenda.
Both sides—pro-Trump activists and anti-Trump activists—showed up in force as a capacity crowd of thousands packed into the Van Wezel Performing Arts center with thousands more watching outside.

Interestingly, Trump won this district in the general election by 11 percent, so the outsized show of force from leftists is not representative of the feelings of those in the district, which sprawls along Florida’s southwestern coast.

Despite the clear and concerted efforts to disrupt, Buchanan kept his cool for more than an hour throughout, made his case, and did not buckle under the left’s pressure. When one woman, who identified herself as a lifelong Democrat who has always voted for Buchanan because she likes him personally but despises Trump, remarked that the town hall must have been “as scary for you as it is for me,” he replied: “I’m enjoying it.”