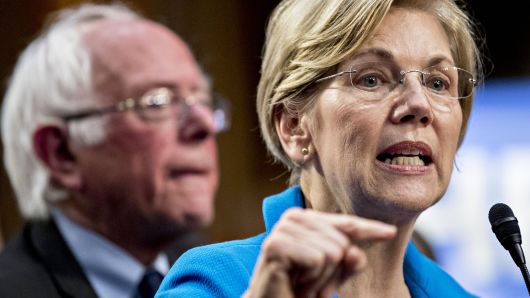 Sens. Elizabeth Warren and Bernie Sanders on Wednesday introduced a bill that would essentially wipe out tens of billions of dollars of Puerto Rico’s $73 billion in outstanding debt.

The proposal, entitled the “U.S. Territorial Relief Act of 2018,” counts Democratic Sens. Kirsten Gillibrand of New York, Edward J. Markey of Massachusetts and Kamala Harris of California as co-sponsors. The bill “provides an avenue to comprehensive debt relief for Puerto Rico and other hurricane-ravaged U.S. territories so that they have a chance to get back on their feet,” according to the sponsors.

“Greedy Wall Street vulture funds must not be allowed to reap huge profits off the suffering and misery of the Puerto Rican people for a second longer. It is time to end Wall Street’s stranglehold on Puerto Rico’s future, return control of the island to the people of Puerto Rico and give the territory the debt relief it so desperately needs to rebuild with dignity,” said Sanders, I-Vt.

“Puerto Rico was already being squeezed before Hurricane Maria hit and will now have to rebuild under the weight of crushing debt. Our bill will give territories that have suffered an extraordinary crisis a route to comprehensive debt relief and a chance to get back on their feet,” said Warren, D-Mass. “Disaster funding and the other resources in struggling territories’ budgets must not go to Wall Street vulture funds who snapped up their debt. Congress should pass this legislation right away — our fellow U.S. citizens are counting on us.”