Update: Pilot Locked Out Of Cockpit Prior To Plane Crashing In France 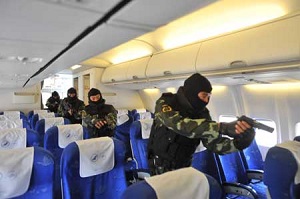 As officials struggled Wednesday to explain why a jet with 150 people on board crashed in relatively clear skies, an investigator said evidence from a cockpit voice recorder indicated one pilot left the cockpit before the plane’s descent and was unable to get back in.

A senior military official involved in the investigation described “very smooth, very cool” conversation between the pilots during the early part of the flight from Barcelona to Düsseldorf. Then the audio indicated that one of the pilots left the cockpit and could not re-enter.

“The guy outside is knocking lightly on the door and there is no answer,” the investigator said. “And then he hits the door stronger and no answer. There is never an answer.”

He said, “You can hear he is trying to smash the door down.”

While the audio seemed to give some insight into the circumstances leading up to the Germanwings crash, it also left many questions unanswered.