Yemen On Verge Of Total Collapse 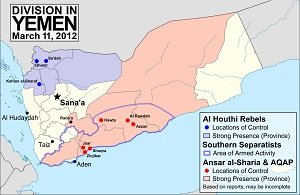 Regional rivals Saudi Arabia and Iran traded accusations Tuesday over the escalating conflict in Yemen, which the UN rights chief warned was on the brink of “total collapse”.

Explosions lit up the skies over the Yemeni capital overnight in the heaviest bombing raids yet of a six-day air war led by Riyadh against Shiite rebels.