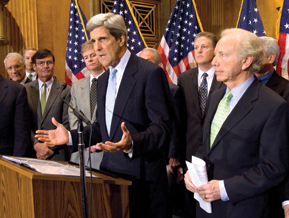 By Ben Geman, The Hill

But the glaring absence of a GOP senator underscored the billâ€™s gloomy future in the 111th Congress.

The press conference on the new bill was held in a Senate hearing room so packed that some reporters had a hard time getting in. The measureâ€™s introduction was the culmination of months of talks and negotiations with an array of stakeholders, and it was immediately hailed by the White House.

Kerry hinted that GOP votes are in play, even though co-author Sen. Lindsey Graham (R-S.C.) has pulled back his support.

â€œI have heard even several Republicans in these last days tell me in private that they are encouraged by what is in this bill, and they are anxious to review it and to work on it,â€ Kerry said.

President Barack Obama said, â€œThis legislation will put America on the path to a clean-energy economy that will create American jobs building the solar panels, wind blades and the car batteries of the future.â€

But the lukewarm reaction of one senior Democrat is a sign of the billâ€™s challenges.

Senate Finance Committee Chairman Max Baucus (D-Mont.) said he is taking a look at the measure, but noted â€œwe have a big, heavy schedule,â€ when asked if the committee would work on the bill.

â€œI am looking at it. Weâ€™ll see,â€ he said. â€œA factor, frankly, is the degree to which the proposal has legs.â€

Marvin Fertel, CEO ofÂ the Nuclear Energy Institute â€” an industry trade group that backs the bill â€” told The Hill that he is reaching out to Republicans such as Sen. Lisa Murkowski (Alaska) and retiring Sen. George Voinovich (Ohio).