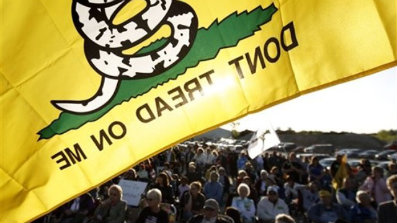 In New Jersey, a “Tea Party” candidate surfaces but local activists haven’t heard of him. In Michigan, a Democratic operative appears closely tied to a slate of candidates running under the Tea Partybanner. In Florida, conservative activists are locked in court over the right to use the Tea Party name.

The list of peculiar Tea Party happenings goes on and on.

As the midterm election nears, allegations are surfacing across the country that Democrats are exploiting conservatives’ faith in the Tea Party name by putting up bogus candidates in November — the claim is that those “Tea Party” candidates will split the GOP vote and clear the way for Democratic victories.

The theories may prove to be more than just conspiracy talk. Some of the allegations are coming directly from local Tea Party activists who are trying to flag the media and election officials as soon as they smell something fishy on the ballot. And they say they’ve got proof.

Gillman, who also authors the blog “MichiganÂ Taxes Too Much” and is running for countyÂ commissioner, caused a stir in Michigan politics in late July after he released documents he obtained from state elections officials about the so-called Michigan Tea Party. The documents, he said, showed that of the 23 candidates under the Tea Party name, at least nine of them had affidavits notarized by a local operative for the Oakland County Democratic Party. He said that was the “smoking gun” to prove Democratic involvement — on top of concerns he and other Tea Partiers had that the candidates on the ticket did not have Tea Party backgrounds.

“Nobody had any idea who these people were,” Gillman told FoxNews.com. “We could at least say, without question, it is the Democratic Party putting it on.”

The plot thickened after the Oakland County Democratic Party chairman, Mike McGuinness, told The Detroit News that operative Jason Bauer may have crossed the line by notarizing the affidavits. He was quoted saying the activity was not “sanctioned” by the local party, but “we have to assess internally what we do next.”

Representatives with the Oakland County and Michigan Democratic parties did not return calls seeking comment.

The Detroit News reported that the Michigan Democratic Party has disavowed any link to the state Tea Party. Gillman said state Republicans and Tea Party activists are currently trying to invalidate at least some of the candidates running under theÂ TeaÂ Party name.