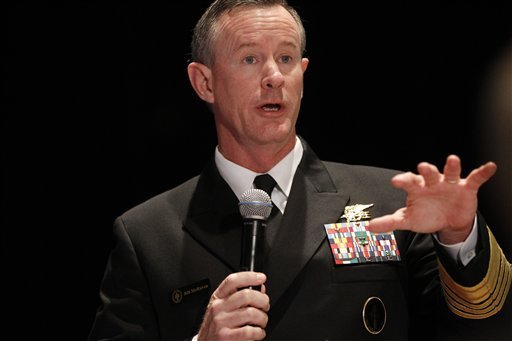 WASHINGTON (AP) â€” Special operations chiefÂ Adm. Bill McRavenÂ warned his troops, current and former, that he would take legal action against anyone found to have exposed sensitive information that could cause fellow forces harm.

â€œWe will pursue every option available to hold members accountable, including criminal prosecution where appropriate,â€ the four-star commander wrote, in an open, unclassified letter emailed to the active-duty special operations community Thursday, and obtained by The Associated Press.

The warning came a day after a retiredÂ NavyÂ commando revealed he is publishing a first-hand account of the raid that killedÂ Osama bin Laden.Â PentagonÂ officials say they have not been given a chance to review the book.

It also follows a media campaign by special operations veterans, decrying alleged leaks by PresidentÂ Barack Obamaâ€™s administration of secret operations, and criticizingÂ Obamaâ€™s highlighting the raid as part of his reelection campaign.

McRavenÂ also took former special operators to task for â€œusing their â€˜celebrityâ€™ status to advance their personal or professional agendas.â€

He acknowledged that former service members are â€œwell within their rights to advocate for certain causes or write books about their adventures,â€ but he cautioned them against claiming to speak for all special operations troops and against endangering troops by what they write.

News broke Wednesday that one of the SEALs McRaven commanded on the binÂ LadenÂ raid would be releasing his book, â€œNo Easy Day,â€ on Sept. 11, with the author listed under the pseudonym ofÂ Mark Owen.

One current and one former U.S. military official confirmed the name, speaking on condition of anonymity because they were not authorized to discuss military personnel matters.