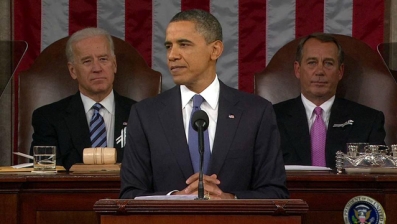 Just hours after delivering his second State of the Union address,Â President Obama was headed to Wisconsin Wednesday to sell the five “pillars” of change he espoused as the foundation for the second half of his term.

Just hours after delivering his second State of the Union address,Â President Obama was headed to Wisconsin Wednesday to sell the five “pillars” of change he espoused as the foundation for the second half of his term.

With the lengthy speech to Congress behind him, the president begins his “White House to Main Street” tour with his seventh trip to the critical swing state since taking office. In the Badger State, Obama will visit Orion Energy Systems, aÂ manufacturingÂ company in Manitowoc, Wis., that designs and creates energy efficient lighting and renewable solar technology for American businesses. Obama will tour the site and deliver remarks to its employees.

Innovations in technology and clean energy were major themes of the president’s remarks Tuesday night. In his address, Obama pivoted his administration from focusing on stopping the economic decline to recovery through reinvention. He urged Congress to set a goal of providing 80 percent of America’s electricity from clean energy sources by 2035, and said new challenges — particularly in alternative fuel projects — would be backed with government investment.

“We’re telling America’s scientists and engineers that if they assemble teams of the best minds in their fields, and focus on the hardest problems in clean energy, we’ll fund the Apollo Projects of our time,” Obama told Congress. ” And to help pay for it, I’m asking Congress to eliminate the billions in taxpayer dollars we currently give to oil companies. I don’t know if you’ve noticed, but they’re doing just fine on their own. So instead of subsidizing yesterday’s energy, let’s invest in tomorrow’s.

Categories Newsroom, Rise Up 1 | Tags: State of the Union address