ALLEN WEST TO OBAMA, REID, PELOSI: â€˜GET THE HELL OUT OF THE UNITED STATES OF AMERICAâ€™ 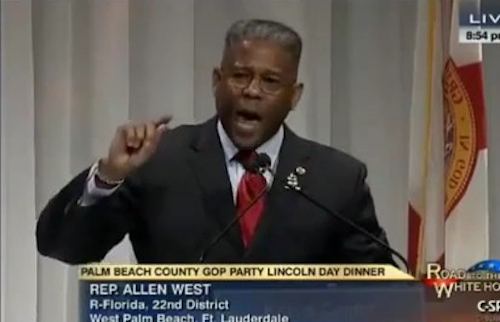 West made the comments during a speech at a Palm Beach County GOP event in West Palm Beach.

â€œThis is a battlefield that we must stand upon. And we need to let President Obama, Harry Reid, Nancy Pelosi and my dear friend, chairman of the Democrat National Committee, we need to let them know that Florida ainâ€™t on the table,â€ West said.

The audience was booing by the time West got to Pelosiâ€™s name.

As the audience cheered and many rose to their feet, West added, â€œYeah I said â€˜hell.â€™â€

â€œThis is not about 1 percent or 99 percent. This is about 100 percent. Itâ€™s about 100 percent America. And I will not stand back and watch anyone defame, degrade or destroy that which my father fought for, my older brother, my father-in-law, myself, my nephew and all my friend still in uniform,â€ he said.

â€œI will not allow President Obama to take the United States of America and destroy it. If that means Iâ€™m the No. 1 target for the Democrat Party, all I got to say is one thing: Bring it on, baby.â€