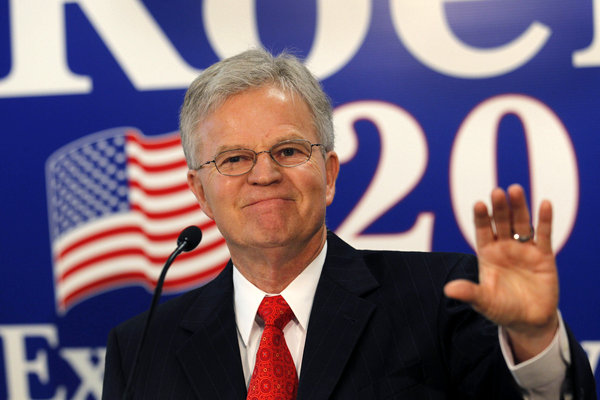 WASHINGTON — A group behind a costly endeavor to field an independent presidential ticket this fall acknowledged Thursday that its efforts to nominate a candidate had failed.

Americans Elect succeeded in getting on the ballot in 29 states, butÂ none of its prospective candidatesÂ received the minimum support needed to participate in a Web-based series of primaries that were to be held this month.

After its board met Wednesday to discuss its options, the groupÂ released a statementÂ Thursday indicating that it would not change its rules, effectively disqualifying all the candidates from participating in an online nominating convention that was scheduled next month.

The future of the organization, which raised $35 million and spent two years trying to create a new method for nominating a presidential ticket, remains unclear.

â€œAs always, we thank everyone who has helped build this organization and are grateful for the work, efforts, and trust so many people have placed in Americans Elect,â€ the group said. â€œWe are continuing the Americans Elect mission of creating more choice in our political system, giving candidates unaffiliated with the nominating process of either major party an authentic way to run for office and giving the American people a greater voice in our political process.â€

Even as it poured $15 million into the laborious process of getting recognized as a party in each state, Americans Elect did not ignite grass-roots enthusiasm or attract prominent candidates, despite its backing by an array of top political and business leaders.

The top declared candidate, former Louisiana Gov.Â Buddy Roemer, had tallied about 6,300 clicks of support on the Americans Elect website by Thursday â€“ far short of the minimum 10,000 required.

Meanwhile, critics pounced on its decision to organize as a tax-exempt organization, allowing it to shield its donors. And prospective candidates balked at the groupâ€™s intent to bow out after the nominating process, which would force the Americans Elect nominee to raise funds from scratch to finance an insurgent campaign.