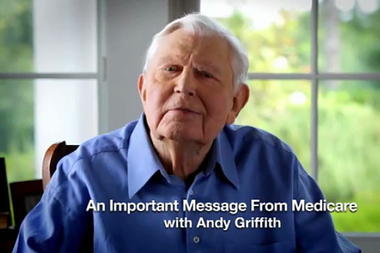 The TV star – whose role as sheriff of Mayberry made him an enduring symbol of small-town American values – tells seniors that “good things are coming” under the health care overhaul, including free preventive checkups and lower-cost prescriptions for Medicare recipients.

Polls show that seniors are more skeptical of the health care law than younger people because Medicare cuts provide much of the financing to expand coverage for the uninsured.

Medicare says the national ad is not political, but part of its outreach to educate seniors about new benefits available next year. Griffith is 84.