Anti-Immigrant Group Calls for ‘Safe Passage’ of Illegals Out of U.S. 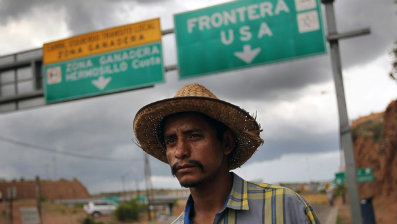 An anti-immigration group is calling on the Obama administration to ensure a smooth exit for illegal immigrants who are trying to leave the U.S. due to the weak economy and Arizona’s strict new immigration law.

Americans for Legal Immigration PAC (ALIPAC) is urging U.S. citizens to pressure the White House and the HomelandSecurity Department to establish “safe departure” border checkpoints along the U.S. border for illegal immigrants so they can leave without fear of being detained or prosecuted for immigration crimes.

Gheen said the safe passage would ensure that illegals “leave in an orderly fashion, instead of trying risky desert crossings, payingÂ money to the cartels for passage south, or fleeing to other states.”

“This is about the only situation we would ever advocate that our immigration laws be waived,” Gheen said. “We want to encourage the illegals to leave America on their own and thus we ask Obama to provide them safe passage out of America.”

The call comes as the Obama administration seeks an injunction in federal court to block Arizona’s immigration law, set to take effect on Thursday, that would make illegal immigration a state crime and require police to check the residency status of anyone they suspect of being an illegal immigrant. A ruling on the case is expected Tuesday night or Wednesday morning.

It is not clear how many have left since the new law passed in April. Some are leaving the U.S. and others are heading to neighboring states.

“I think it’s clearly part of the attrition strategy. Make things so horrible for immigrants that they will self deport,” said Sarahi Uribe, a regional organizer for the National Day Laborer Organizing Network. “But while it’s true some people are leaving Arizona, aÂ greatÂ deal of people are staying.”