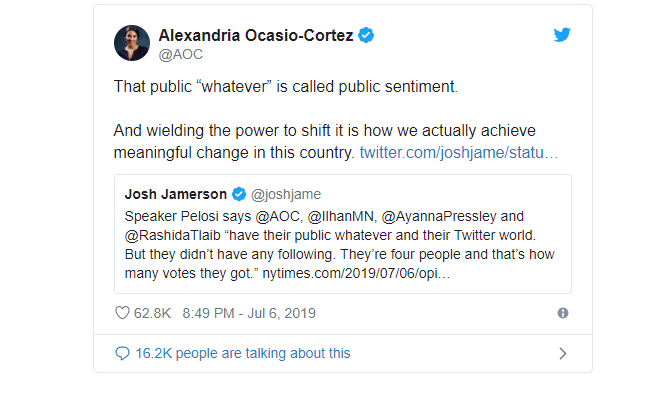 Rep. Alexandria Ocasio-Cortez fired back Saturday night after House Speaker Nancy Pelosi criticized her and other far-left freshmen congresswomen for voting against a $4.6 billion border bill that President Trump signed into law on Monday.

Congress had approved the bill with help from moderate Democrats – and in a New York Times interview Pelosi slammed the progressive wing of her party for not also supporting the humanitarian-assistance measure.

“All these people have their public whatever and their Twitter world,” Pelosi said. “But they didn’t have any following. They’re four people and that’s how many votes they got.”

But Ocasio-Cortez took a different view.

“That public ‘whatever’ is called public sentiment,” Ocasio-Cortez answered later in a Twitter message. “And wielding the power to shift it is how we actually achieve meaningful change in this country.”