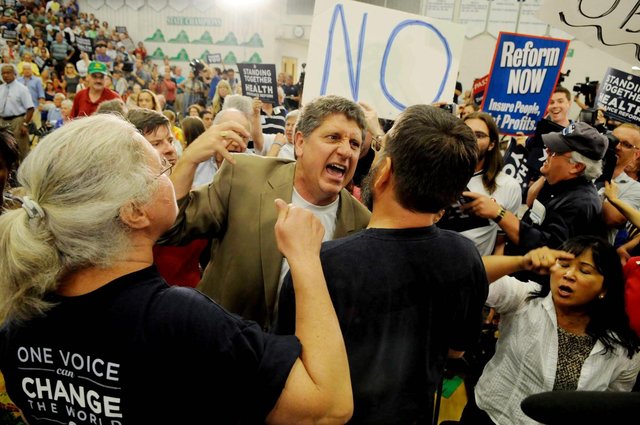 As members of Congress retreat from Washington this month to spend time in their home states, House Democrats and Republicans have traded barbs accusing each other of hiding from the public this summer.

The National Republican Congressional Committee (NRCC) on Friday debuted a page on its website listing dozens of House Democrats it says haven’t scheduled town-hall meetings for the six-week recess.

Democrats have fired back, calling the list a lie while accusing Republicans of producing a red herring to mask an empty legislative agenda.

Town-hall meetings, where lawmakers fulfilled a time-honored and once typically mundane duty during summer visits home, have become popular venues for frustrated voters to vent their anger at Washington. Democrats particularly faced vocal crowds last summer at such gatherings, some of which degenerated into tussles involving pushing and shoving.

So Republicans say Democrats are dealing with potentially uncomfortable public appearances by simply refusing to meet with voters face to face.

The NRCC Web site as of Sunday listed 69 House Democrats who it says haven’t scheduled town-hall meetings, while only six have.

“As Nancy Pelosi‘s Democrat puppets refuse to face the American people this August, it has become even more apparent that no amount of spin or political attacks will save the Democrat majority from being held accountable for their unpopular agenda on Election Day,” said Ken Spain, a spokesman with the NRCC, the fundraising arm of House Republicans.