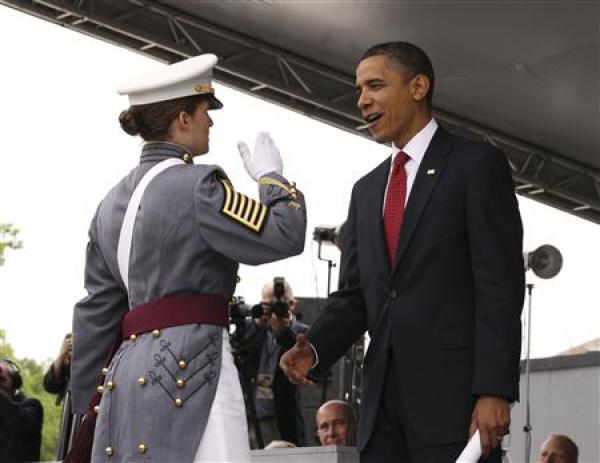 In a commencement speech to the graduating class at the U.S. Military Academy at West Point, the president outlined his departure from what Bush had called a “distinctly American internationalism.” Instead, Obama pledged to shape a new “international order” based on diplomacy and engagement.

Obama has spoken frequently about creating new alliances, and of attempts to repair the U.S. image abroad after nearly a decade in which Bush’s approach was viewed with suspicion in many quarters.

Unlike Bush, who traveled to West Point in the wake of the Sept. 11, 2001, attacks to announce his American-centered approach to security, Obama on Saturday emphasized his belief in the power of those alliances.

“Yes, we are clear-eyed about the shortfalls of our international system. But America has not succeeded by stepping outside the currents of international cooperation,” he said. “We have succeeded by steering those currents in the direction of liberty and justice — so nations thrive by meeting their responsibilities, and face consequences when they don’t.”

In his speech — the ninth wartime commencement in a row — the commander in chief, who is leading two foreign wars, expressed his faith in cooperation to confront economic, military and environmental crises.

“The international order we seek is one that can resolve the challenges of our times,” he said in prepared remarks. “Countering violent extremism and insurgency; stopping the spread of nuclear weapons and securing nuclear materials; combating a changing climate and sustaining global growth; helping countries feed themselves and care for their sick; preventing conflict and healing its wounds.”

And yet, as he calls for global cooperation, Obama has intensified the U.S. war in Afghanistan. And his administration has repeatedly confronted the dangers of Islamic terrorism on U.S. soil, including unsuccessful attempts to down a Detroit-bound airliner and explode a car bomb in New York’s Times Square.

To the men and women in the hall, many of whom are headed to Afghanistan because of the expansion of the war the president announced here six months ago, Obama pledged “the full support of a proud and grateful nation.”