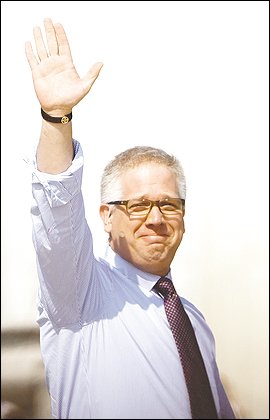 The Fox talk show host wanted their support as he shifted from political commentary to a more spiritual message, he told the group of about 20.

This is where God is leading me, Beck declared, according to Richard Land of the Southern Baptist Convention, who was there, along with Focus on the Family founder James Dobson.

Land said most in the group found Beck’s faith genuine and heartfelt, although not everyone agreed to embrace him publicly.

“We walked back to the hotel after and said, ‘That was extraordinary,’ ” Land said of his conversation with Dobson after the dinner in Manhattan. “I’ve never heard a cultural figure of that popularity talking that overtly about his faith. He sounded like Billy Graham.”

Two days after Beck’s “Restoring Honor” rally drew a crowd that stretched from the Lincoln Memorial to the World War II Memorial, many Americans were still trying to figure out if the commentator had just seized the mantle of the religious right.

Conservative Christian talk radio was crackling with debate about Beck’s Mormonism. Religious progressives were assailing his attacks on President Obama’s Christianity. Scholars of religion and politics were analyzing Beck’s evangelical-like talk of being saved from drug and alcohol addiction. Some pastor-bloggers were bemoaning what they consider the conflation of celebrity, politics and spirituality.

“Politically, everyone is with it, but theologically, when he says the country should turn back to God, the question is: Which God?” said Tom Tradup, vice president for news and talk at Salem Radio Network,which serves more than 2,000 stations, most of them Christian. “How much of this is turning to God? How much is religious revival and how much is a snake oil medicine show?”