Behind the Scenes, Christian Right Leaders Rally Behind Rick Perry 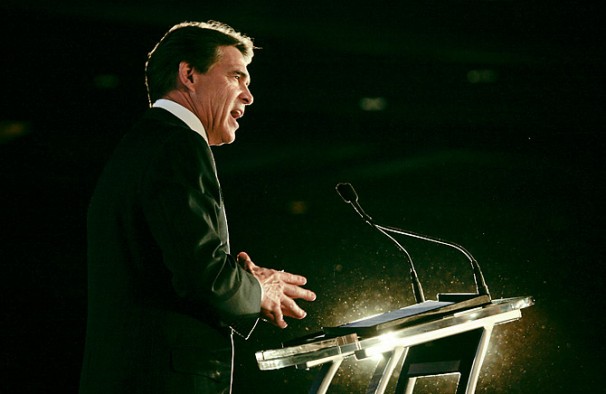 In early June, TIME has learned, a group of prominent figures on the Christian Right held a conference call to discuss their dissatisfaction with the current GOP presidential field, and agreed that Rick Perry would be their preferred candidate if he entered the race. Among those on the call were David Barton, the Texas activist and go-to historian for the Christian Right and John Hagee, the controversial San Antonio pastor whose endorsement John McCain rejected in 2008.

Religious conservatives have often played a substantial role in choosing past Republican nominees, but leaders on the Christian Right have been conspicuously quiet so far in this campaign season. Privately, however, they are enthusiastic about Perry and are encouraging the Texas governor to throw his ten-gallon hat into the ring.

Perryâ€™s favor with the Christian Right is relatively new, and he is their candidate of choice as much by default as anything. Many leaders had hoped that Mike Huckabee would make a second run for the nomination and give them a fellow religious conservative (and a Southerner) to support. When Huckabee chose to sit out the race and Haley Barbour stepped aside as well, some Christian Right bigwigs considered throwing their support behind Newt Gingrich.

The former Speaker has made religious freedom for Christians his signature issue over the past few years. And more importantly, Gingrich needs religious conservatives more than they need him â€” he might feel indebted to that constituency if he won, the thinking went.Â But as Gingrichâ€™s campaign operation seems to have shrunk to a few interns and wife Callistaâ€™s Twitter feed, alarmed Christian Right leaders have sought to find a newâ€“preferably electableâ€“candidate to carry the social conservative banner.

Whatâ€™s wrong with the existing crop of candidates? Tim Pawlenty has the support of evangelical leaders outside the Christian Rightâ€“in a recent survey of the board of directors of the National Association of Evangelicals,Â 45% named Pawlenty as their preferred GOP nominee. However, that impressive result may have something to do with the fact that the NAE president, Leith Anderson, is Pawlentyâ€™s pastor and may not be representative of broader evangelical opinion. Mitt Romney ran into problems with evangelicals in 2008 because of his Mormon faith, and his recentÂ refusal to sign an anti-abortion organizationâ€™s campaign pledge did nothing to win over his critics.

Meanwhile, no one questions the social conservative credentials of Rick Santorum or Michele Bachmann. But Santorumâ€™s poll numbers in Iowa are smaller than the number of children he has. And while Bachmann has been on a hot streak since the first candidateâ€™s debate, Christian Right leaders continue to be far less willing to embrace her (or Sarah Palin, for that matter) than the rank-and-file or more secular politicos. Is that sexism at work? Possibly. Maybe even probably. But geography is an important factor as well. Many Christian Right leaders think the GOP primary schedule favors a Southern candidate. And southern Minnesota does not count.

So, come on down, Rick Perry! He may be the favorite by default, but the Texas governor is also a terrific match for the Christian Right. Sarah Posner of Religion Dispatches recently outlinedÂ Perryâ€™s social conservative bona fides and theyâ€™re impressive: