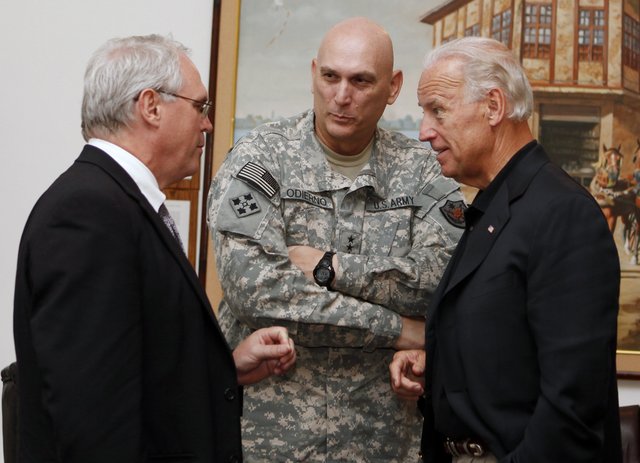 BAGHDAD (AP) â€” Vice President Joe Biden returned Saturday to Iraq to coax its government into picking a new prime minister, months after elections left the nascent democracy in a state of gridlock as the U.S. prepares to pull out its troops.

Biden‘s trip â€” his fifth since he was elected vice president, and his second this year â€” signals Washington’s growing impatience with Iraq‘s stalled political process since the March 7 vote. The Iraqi election failed to produce a clear winner, and competing political alliances have been angling to secure an edge in parliament â€” mostly through backroom deals that leave voters out of the process.

The vice president was upbeat upon arrival, downplaying concerns that the impasse would lead to a crisis.

“This is local politics,” Biden told reporters in brief remarks at the sprawling U.S. military base west of Baghdad known as Camp Victory. “This is not a lot different than any other government.”

He added: “I remain, as I have from the beginning, extremely optimistic about the government being formed here.”

Iraqi officials appeared cool to the prospect of Biden muscling in on their political scene.

“The aim of Biden‘s visit is not to impose a point of view nor an attempt to interfere in Iraq‘s political process,” said Yassin Majid, an adviser to Prime Minister Nouri al-Maliki. He said Biden and the prime minister would meet Sunday to discuss plans for U.S. troops to leave Iraq and ways to deepen ties between the two countries â€” as well as ways to build the new government.

Biden‘s aides were quick to note that he only will offer help if it was requested, and not advocate for any specific coalition or agenda â€” other than an end to the delay that has, in turn, pushed back resolution of a number of issues facing Iraq.

He also is set to meet Iraqi President Jalal Talabani and former Prime Minister Ayad Allawi during the long July Fourth weekend he is in Iraq. Biden also plans to meet with troops and will attend a naturalization ceremony Sunday morning.