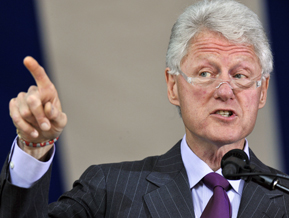 Former President Bill Clinton is taking the so-called â€œbirthersâ€ to task for ignoring evidence that President Barack Obama was born in the United States.

Clinton made the comments during a commencement address at Yale University on Sunday as part of a critique of American media consumption habits.

The former president pointed to the â€œbirthersâ€ an example of one of those â€œbizarre consequences.â€

â€œHawaii, the state where President Obama was born, has done everything they can to debunk this myth that he wasnâ€™t born in America,â€ Clinton said. â€œTheyâ€™ve done everything but blow up his birth certificate, put it in neon lights and hang it on the dome in the Capitol.â€

â€œBut 45 percent of registered Republicans still believe that he is serving unconstitutionally,â€ Clinton insisted, though he did not identify the poll.

â€œWhy?â€ he asked. â€œBecause theyâ€™ve been told that by the only place they go to get information.â€

Responding to rumors during the presidential campaign about Obamaâ€™s place of birth, Hawaii state officials posted his birth certificate online.