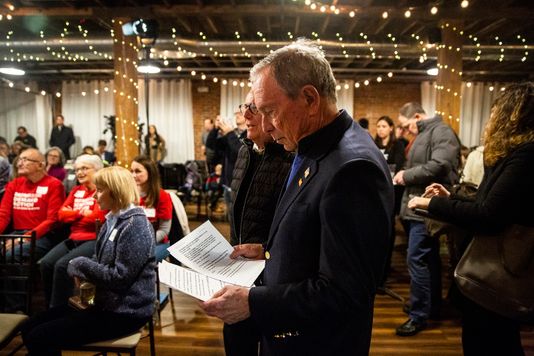 A newly-surfaced recording from a 2015 speech by Michael Bloomberg, in which the former three-term mayor of New York City gives a full-throated defense of the controversial policing procedure known as “stop and frisk,” is threatening to undermine the 2020 presidential candidate’s subsequent apologies for backing the policy and hurt his status with minority voters.

In an audio clip of a 2015 speech, the billionaire gave to the Aspen Institute, Bloomberg acknowledged that “stop and frisk,” targeted minority “kids” who cops must throw “up against the wall” to disarm. The Aspen Times reported at the time that Bloomberg representatives asked the Institute not to distribute footage of his appearance.

“Ninety-five percent of murders- murderers and murder victims fit one M.O. You can just take a description, Xerox it, and pass it out to all the cops,” he said. “They are male, minorities, 16-25. That’s true in New York, that’s true in virtually every city (inaudible). And that’s where the real crime is. You’ve got to get the guns out of the hands of people that are getting killed.”

Bloomberg also said urban crime-fighting required cities to “spend the money” and “put a lot of cops in the streets,” particularly in “minority neighborhoods,” where he said the crime is. He also acknowledged the “unintended consequences” of the policy.