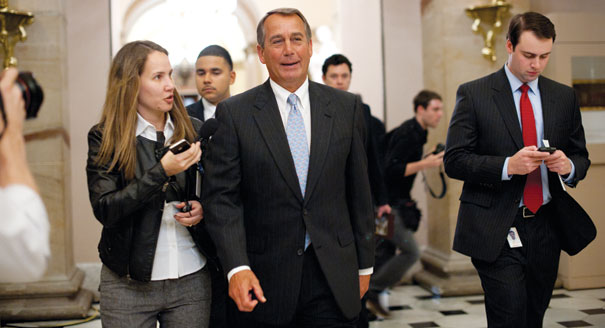 House SpeakerÂ John A. Boehner and theÂ GOPâ€™s uneasy partnership with the tea party seems to be fraying at the edges.

Three days after the founder of one of the largest tea party groups called the Ohio Republican a â€œfool,â€ the head of the congressional Tea Party Caucus declined to defend herÂ House colleague.

The Minnesota Republican didnâ€™t even use the speakerâ€™s name, sticking instead to her talking points about $105 billion that she contends was misappropriated byÂ Democrats in the Obama health care law.

â€œWhat we are trying to do asÂ Republicans in theÂ House is look for every place we possibly can to cut spending. We have done our part to look for cuts,â€ she said, citing theÂ GOP plan for cutting more than $60 billion during the rest of the current fiscal year from current spending levels. But, she said, â€œWe canâ€™t stop there.â€

She added that she disagrees withÂ Mr. Boehner on raising the debt ceiling.

â€œWe are just giving Congress a license to keep on spending,â€ she said.

But whileÂ Mrs. Bachmann was mum onÂ Mr. Boehner on Sunday, other tea party leaders took shots in the past week.