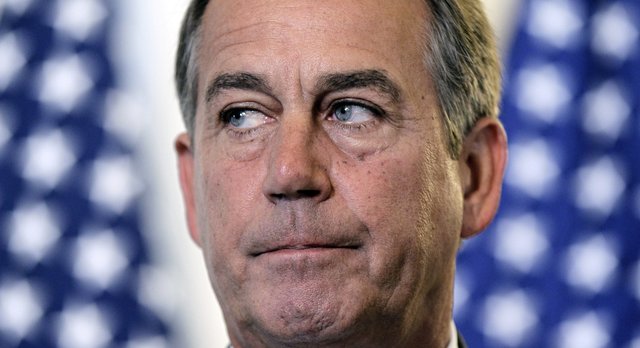 Stepping up a simmering constitutional conflict,Â House SpeakerÂ John A. Boehner warned PresidentÂ Obama on Tuesday that unless he gets authorization fromÂ Congress for his military deployment inÂ Libya, he will be in violation of the War Powers Resolution.

In a letter sent Tuesday afternoon,Â Mr. Boehner, the top Republican in the constitutional chain of succession, saidÂ Mr. Obama must provide a clear justification by Friday for committing troops toÂ Libya.

Sunday marks the 90th day since the president notifiedÂ Congress that U.S. troops had been committed to help enforce a no-fly zone overLibya, which is designed to protect the rebels fightingÂ Col. Moammar Gadhafiâ€™s government.

â€œThe Constitution requires the president to â€˜take care that the laws be faithfully executed,â€™ and one of those laws is the War Powers Resolution, which requires an approving action byÂ Congress or withdrawal within 90 days from the notification of a military operation,â€Â Mr. Boehner said in the letter.

TheÂ White House has repeatedly said it has complied with the law by alertingÂ Congress to the initial deployment, and by testifying at more than 10 hearings and providing 30 follow-up briefings about the pace and extent of U.S. troopsâ€™ commitment.

But the administration has never sought approval fromÂ Congress.

â€œWe are in the final stages of preparing extensive information for theHouse andÂ Senate that will address a whole host of issues about our ongoing efforts inÂ Libya,â€Â White House National Security CouncilspokesmanÂ Tommy Vietor said Tuesday evening, adding that the administration also will present its legal analysis of the War Powers Resolution.

The Constitution givesÂ Congress the power to declare war, but makes the president commander-in-chief. Those dual roles have caused tension throughout the nationâ€™s history.

Two weeks ago, theÂ House passed a nonbinding resolution that urgedMr. Obama to provide detailed information on the deployment.Â Mr. Boehner at the time signaled thatÂ Congress might cut off funding for the deployment inÂ Libya if the administration didnâ€™t comply.

That resolution gaveÂ Mr. Obama 14 days to comply, and the time runs out on Friday.

TheÂ House turned back an even more strident resolution offered byÂ Rep. Dennis J. Kucinich, Ohio Democrat, that would have demanded troop withdrawal. But between the two resolutions, roughly three-quarters of theÂ House [-] including nearly half of all Democrats [-] went on record challengingÂ Mr. Obamaâ€™s handling of the war.

House lawmakers are getting itchy fingers as they look for ways to rein in the president.

On Monday, they voted 248-163 to amend a veterans funding bill to stop any of the money in that measure from going toÂ Libya operations. A similar amendment on the homeland security spending bill failed two weeks ago.

U.S. forces initially took the lead in establishing the no-fly zone, withÂ Mr. Obama saying he felt compelled to act becauseÂ Col. Gadhafi had threatened to show â€œno mercyâ€ on his own citizens who were rebelling.

American forces eventually changed over to a support role, and NATO is now running the operation.