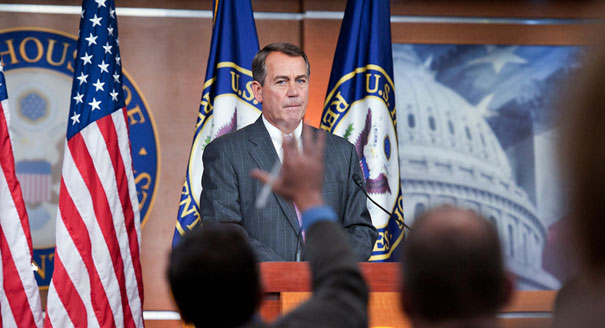 (Reuters) – John Boehner, the top Republican in Congress, told White House talks on Sunday that budget cuts must exceed the amount by which the debt ceiling is raised and said anyÂ deal must exclude tax hikes.

An agreement that builds on the work of a group led by Vice President Joe Biden show most promise, an aide to Boehner said on Sunday after negotiations at the White House that lasted about 75 minutes.

“The Speaker told the group that he believes a package based on the work of the Biden group is the most viable option at this time for moving forward,” the aide said.

Boehner told Sunday’s session that Republicans consider as “fundamental principles” that spending cuts should exceed the amount they will agree raise the debt ceiling, and that any deal will restrain future spending and include “no tax hikes.”