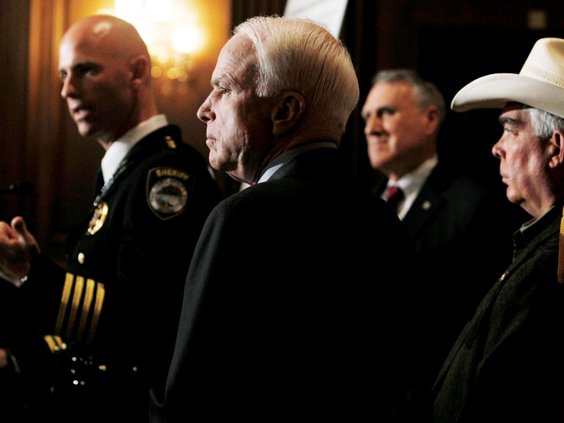 By Valerie Richardson, The Washington Times

Sen. John McCain of Arizona has been called many things during his lengthy political career: maverick, straight-talker, the White Tornado. But “border hawk” isn’t one of them. Until now.

Facing the toughest primary challenge of his 24-year Senate tenure, Mr. McCain has shelved his advocacy of a pathway to citizenship, denounced by its critics as amnesty, and embraced a crackdown on border security that includes the state’s new immigration law.

The law allows police to question people who they suspect are not citizens and requires them to carry proof of their status.

Mr. McCain announced his support for the legislation shortly after the governor signed it. His Republican primary opponent, former Rep. J.D. Hayworth, was an early backer of the legislation, known as Senate Bill 1070.

“We do have an obligation to secure our borders so that our citizens are not threatened,” Mr. McCain said in an interview last week on KTAR-AM in Phoenix, although he has expressed reservations about portions of the new law.

“Now our job is to make sure that no citizen, under any circumstances, will have their rights threatened, no matter what their ethnic background is,” he said.

Mr. McCain is airing ads on Arizona television touting the new border security plan that he co-sponsored. It calls for deploying an additional 3,000 National Guard troops and 3,000 more Border Patrol agents in Arizona, increased funding for border security, and finishing the 700-mile border fence, with reinforcements along the Arizona sector.

The Hayworth campaign shot back by accusing Mr. McCain of undergoing an “election-year conversion” while adopting Mr. Hayworth’s long-held positions on immigration.

“This is a guy who five years ago was saying, ‘We’ve gotta have amnesty,’ ” said Hayworth spokesman Mark Sanders. “Now he’s saying, ‘Build a fence and put troops on the border.’ He’s done a total turnaround on the issue.”

Whether Mr. McCain’s move to the right will save his political career remains unclear.