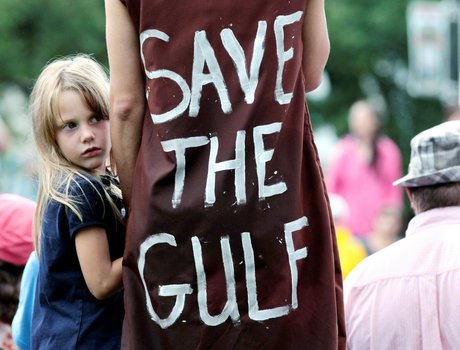 By David Eldridge, The Washington Times

Unsuccessful in its latest bid to plug the oil leak off the Louisiana coast, BP on Sunday announced a new attempt to place a “containment cap” atop the gushing well one mile deep in the Gulf of Mexico.

Robert Dudley, managing director of BP, said Sunday on CNN that the new remedy, which could take up to seven more days to take effect, is not a sure thing, and wouldn’t capture all the leaking oil even if it works.

But it remains the best course of action available, Mr. Dudley said, in the wake of Saturday’s failure of “top kill,” the attempt to plug the well with heavy mud.

“The oil is going to flow for a while,” a glum-looking Mr. Dudley said on CNN’s “State of the Union,” adding that “we are going to redouble our efforts to make sure it is kept off the beaches.”

“We failed to wrestle this beast to the ground,” he said.

President Obama, in a statement released Saturday night from Chicago, where the Obamas are spending the Memorial Day holiday, said the “top kill” failure was “as enraging as it is heartbreaking.”

Mr. Dudley said the company had learned lessons from an earlier failed attempt to place a containment cap – the lower marine riser package – over the well, when ice crystals clogged the device. This time, Mr. Dudley said, BP engineers will pump warm seawater down the pipe to prevent the icing problem while the cap is being attached.

The containment effort is a stopgap measure to buy time until August, when two relief wells are expected to come online and allow BP to shut down the blowout.

“If we can contain the flow of the well between now and August and keep it out of the ocean, that’s also a good outcome,” Mr. Dudley said “And then, if we can shut it off completely with a relief well, that’s not a bad outcome, compared to where we are today.”