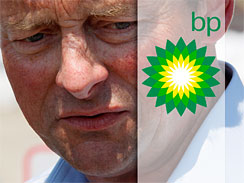 WASHINGTON – BP Chief Executive Tony Hayward was set to face the wrath of U.S. lawmakers on Thursday as investors welcomed a plan to set up a $20 billion fund to cope withGulf of Mexico oilÂ spill claims.

Hayward will appear before the HouseÂ Energy and CommerceÂ Committee’s subcommittee on oversight and investigations, investigating the April 20 explosion that killed 11 workers and unleashed a flood of oil that has yet to be stopped. The testimony will be streamed live on msnbc.com.

It is unlikely that lawmakers, especially in an election year, will adopt President Barack Obama’s more conciliatory tone toward BP.

After accusing the company a day earlier of “recklessness,” Obama and top advisers met Wednesday with BP officials including Hayward and board chairman Carl-Henric Svanberg, after which the president announced BP concessions to pay a $20 billion fund.

President Barack Obama announced the agreement after White House officials held four hours of talks with BP executives. The British company’s bosses emerged from the discussions to offer an apology for the worst oil spill in U.S. history.

Svanberg also announced the company would not pay dividends to shareholders for the rest of the year, including one scheduled for June 21 totaling about $2.6 billion. The company will make initial payments into the escrow fund of $3 billion this summer and $2 billion in the fall, followed by $1.25 billion per quarter until the $20 billion figure is reached.