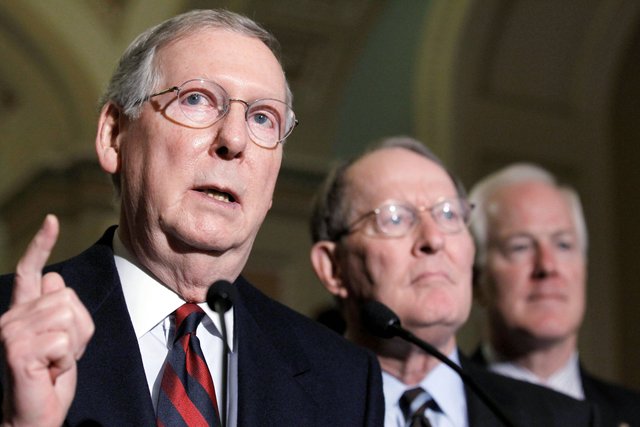 Senate Republicans are scrambling to regain the political edge in the budget debate, with internal divisions surfacing over policy and tactics in the wake of a House special election loss in New York.

The tensions spilled out at a closed-door lunch this week in the ornate Lyndon B. Johnson room of the Capitol.

South Carolina Sen. Jim DeMint expressed frustrations that Senate Republican leaders have failed to publicly lay out a specific set of demands as a condition for increasing the national debt ceiling. But Sen. John McCain (R-Ariz.) had heard enough, scolding DeMint for pushing a strategy he believed could undercut his Arizona colleague, Whip Jon Kyl, who is engaged in closed-door bipartisan talks to cut a deficit deal with the White House, according to four people in the room.

Adding to the private consternation, five Republicans broke with their party Wednesday, voting against Wisconsin Rep. Paul Ryanâ€™s controversial budget plan, which had emerged as a central issue in the New York race.

Senate Minority Leader Mitch McConnell made clear that he wouldnâ€™t twist arms and pressure his colleagues to vote for the Ryan plan, and McConnell reportedly told his colleagues that he warned House Speaker John Boehner (R-Ohio) of the political risks in proposing a major Medicare overhaul as part of the Ryan budget, sources said.

The Senate GOPâ€™s internal debate speaks to the broader political dilemma now facing Republicans on both sides of the Capitol: They have dominated the deficit issue since the 2010 election season and are now struggling to get back on offense. At a closed-door Wednesday lunch, Senate Republicans said they agreed they still need to â€œaggressivelyâ€ tackle Medicare, believing that is the only way to control the spiraling costs of health care that are contributing heavily to the $14.3 trillion national debt.

And Republicans roundly dismissed reading too much into the House loss, saying a third-party candidate contributed to Democrat Kathy Hochulâ€™s win and that voters would eventually punish Democrats if they failed to produce a budget plan of their own.

â€œTry to keep it to two candidates,â€ Kyl said of his takeaway of the House race.

But following the collapse of the Ryan plan in the Senate and the loss of a House race where the Medicare overhaul emerged as a major issue, how the GOP repositions itself in the budget debate will have enormous stakes for a party that campaigned on cutting deficits in 2010.

Republican leaders have placed their faith behind Kyl and House Majority Leader Eric Cantor to reach a deal for their party as part of bipartisan talks being led by Vice President Joe Biden to raise the national debt ceiling while enacting trillions of dollars in spending cuts.