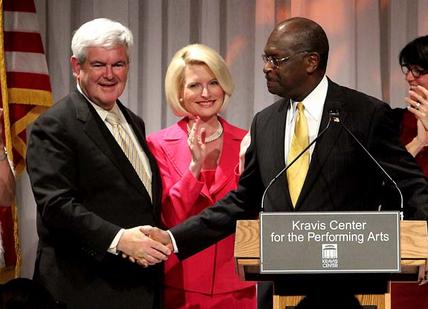 Cain bowed out of the race in December after several allegations of sexual harassment and an affair, leaving Gingrich as the conservatives’ top choice to battle Mitt Romney for the nomination.

Cain called Gingrich “a patriot” with “bold ideas,” and said he will be both active and vocal in Gingrich’s campaign.

“Newt embraces 9-9-9; we talked about it,” Cain told The Palm Beach Post of his signature tax reform policy. “He doesn’t have to be out there carrying the flag; that’s my job. The fact is that I’m going to be a key player on his economic growth and job advisory panel.”

Gingrich referred to “Team of Rivals,” the book about Abraham Lincoln’s presidency and Lincoln’s ability to bring rivals into his camp. Gingrich has now secured the endorsement of Cain and former GOP presidential candidate Rick Perry.